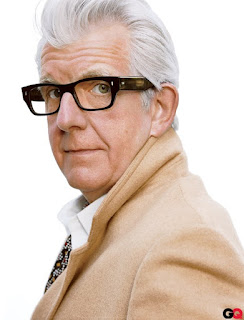 There’s a certain kind of music geek who is perpetually in love with British punk and post-punk pop, the days of Stiff Records, Elvis Costello in his prime, early Pretenders and weirdos like Ian Dury. Not surprisingly, then, this kind of Mojo magazine fetishist is also in love with Nick Lowe, who had a direct hand in all of those elements: as a label owner, as a producer, and as an artist.

I’ve never been one of those geeks; though I appreciate that scene, I’m maybe five years too young for it for that stuff to have any particularly nostalgic pull. And if I’m going to listen to an Elvis Costello record, even though I love the early singles I usually reach for King of America or Blood and Chocolate. I like Lowe’s one big hit, “Cruel to Be Kind,” as much as anyone, but I never dove in much deeper than that. My loss.

His second wind, starting with 1994’s The Impossible Bird, had made him a whole new wave of fervent fans. I didn’t catch up until I heard 2002’s aptly titled The Convincer. That album opens with the song "Homewrecker," where Lowe’s chocolate-covered croon savours every word of the opening a cappella line: You look like butter wouldn’t melt in your mouth—there is then a long pregnant pause over a single sustained organ chord—but I know it would. It’s incredibly sexy. Staring at Lowe’s handsome visage on the album cover, butter isn’t the only thing melting in that song—so is my heterosexuality.

Lowe’s 2011 album The Old Magic comes on the heels of a comprehensive career compilation (Quiet Please: The New Best of Nick Lowe), a reissue of 1979’s beloved Labour of Lust, and vinyl reissues of recent work. And up against that legacy, it still holds up as one of the strongest collection of songs he’s ever written and performed.

I had the privilege of talking to Lowe for Maclean’s magazine: the full Q&A is here. Read that first before you continue here.

Below are some deleted scenes from the conversation. Nick Lowe and his band play the Phoenix club in Toronto on Monday, April 23.

When I was 18 and left home to join a band, it was out of the question that you would be doing this into your 30s. It was a ridiculous concept. But when I was a youngster, I always wanted to be old. I always liked older people’s music. When I was a kid I could never make myself sound old. I felt I had to wait around until I was able to sing something that had a bit of weight to it.

You also turned grey quite early, didn’t you? It looks like it in the video for "Cruel to Be Kind."

I did. I got a streak in the front and I thought, man, that looks good. Happy day! Unfortunately, it got more and more white until finally the whole lot went. It didn’t fall out, though.

Did any manager or record label try to convince you to dye it, and squeeze yourself into tight jeans?

No. They wouldn’t have got very far if they did.

I knew that you were at one point Johnny Cash’s son-in-law and that you remained close after your divorce and that you wrote "The Beast in Me" for his first ’90s comeback album. But I only realized recently that he covered your songs as early as 1980.

Yes, he did a song of mine called "Without Love." He made it his own, and now I do it like him. The old songs you do, it’s funny how they change without you realizing that you’re changing the way you perform them. You only realize it when you encounter the original again.

What, if any, kind of stock-taking did you do when the recent reissues came out? Do you ever listen to your records? Were you forced to?

I was forced to. When I listen to the old records, I could hear really good ideas, but I’d think, ‘Why did you do that bit?’ And especially, ‘Why did you do it again, later in the song?!’ I could tell I was young and in a hurry and got the thing finished. Whereas now, I’m much more intent on stripping it down.

I’ve heard you say that you purposely underproduce your recent albums so that the songs stand on their own and some brilliant ear will recognize their inherent genius and cover the song. How often has that actually happened? I know that Rod Stewart did “Shelly My Love.”

I’ve had some good covers over the years.

Off the recent records, though?

No, unfortunately. Englebert Humperdinck did “You Inspire Me”—though it was a particularly unfortunate version. (Laughs) But, you know, thanks, Englebert! A lot of younger people do my more recent stuff, but they’re not big hits. And then of course, songs like “Peace, Love and Understanding” have been covered—well, not hundreds of times, but…

Hundreds of thousands of dollars’ worth of times, you mean.

Well, yes, in one particular case!

I’ve heard you say that you don’t write in character or do personal songs. But come on, surely you must.

I don’t. I will stick in something somebody said, but I never really go out to explain, “Then she did this, and can you believe it.” I can tell when people are doing that and it goes in one ear and out the other. The minutiae of people’s situations doesn’t interest me. I like hearing a familiar object viewed from an unusual angle—that’s more my approach. But I do know what I’m singing about: I don’t put my diary to music, but I know what it feels like to be mistreated or to feel blue or to feel extremely happy.

So nobody listens to a song like “Lately I’ve Let Things Slide” and thinks, maybe he is letting things slide?

I suppose that one I certainly dug into some personal experience. But there again, it’s viewed from a distance. I am a hack, a Tin Pan Alley hack.

Your last album, from five years ago, is called At My Age and has several songs about being surprised to fall in love again: "Hope for Us All," "Better Man." You had just recently remarried, and surely people are going to look at that and read a lot into your personal life?

I suppose so. If they do, they do behind my back. I don’t encounter much speculation. I don’t think people who like what I do are looking for insights into my personal situation. I think it’s just good tunes—if they think they’re good, which I hope they do.

You’ve been close to big things since the beginning: your first band, Brinsley Schwarz opened for arena rockers in the '70s, and obviously you produced Elvis Costello, and you are old friends with Huey Lewis, who had the biggest band in the U.S. in 1985, when he did a song with you. What did you learn about what you didn’t want from their experiences?

I never really wanted fame, other than when I was a kid starting out. I thought I wanted that. We had an experience with my band—which is quite well documented—when our management got us a gig at the Fillmore East and they chartered a plane of journalists and flew them to see this show, where we were on a bill with Van Morrison, who was on fire—he had just released Moondance. And everything that could go wrong, did go wrong. It was awful and incredibly embarrassing. I’ve had occasion to fall to my knees and give thanks for that experience, because it gave me an early lesson in the vagaries of chasing fame, and how it’s much better to try and tread the fine path between keeping your head down, keeping your head just below the parapet enough that you can pop up every so often when you want to tell people something, and people won’t forget who you are, but they also won’t be nudging you in the supermarket and peering in your basket to see what you’re eating. I never wanted any of that. Huey and Elvis absolutely love it, they thrive on it. I never wanted to be public property. I was more of a snob. I thought I was a bit better than that!

Posted by mmmbarclay at 7:07 PM