Have Not Been the Same: The originals

From the shameless (somewhat) self-promoting file, here’s the album I was most excited about last month. This review ran in the Waterloo Record and Guelph Mercury on Nov. 22. 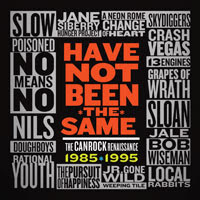 Have Not Been the Same – Various Artists (Pheromone)

Full disclosure: I have a clear conflict of interest in reviewing this compilation: I co-authored the book on which it is based, about Canadian rock music between the years 1985-1995, a period I called the CanRock Renaissance. The book came out in 2001, and was revised and reissued in 2011, which prompted me to put out my own compilation, where current artists, including Great Lake Swimmers, Corb Lund, and members of Broken Social Scene and Arcade Fire, covering the likes of Sloan, The Tragically Hip, Men Without Hats and more. (It’s available from Zunior.com and iTunes, with all proceeds going to the Centre for Addiction and Mental Health. It’s amazing and you need to own it. I’m not just saying that, trust me.)

Now my co-author Jason Schneider (who, by the way, also wrote the amazing and underrated Whispering Pines) has followed up with a collection of rare, unreleased and out-of-print recordings that celebrate a period of this country’s musical history that is easily swept under the rug to make room for baby boomer classic rock and our more recent successes. All proceeds go to Kids Help Phone, and unlike my digital-only release, Schneider managed to get this pressed on to two heaping slabs of vinyl—the format much of this material first appeared on (if, in fact, it ever surfaced at all).

The real coup for Schneider is securing the rights to the title track, which has been unavailable in any format (other than low-res YouTube clips, see above) for almost 20 years. It’s by the short-lived Vancouver sensation Slow, who were beloved in the Pacific Northwest for being a forerunner to grunge’s marriage of punk and hard rock. The three-minute track is still incredibly thrilling, anchored by a guitar riff that owes more to a Stevie Wonder lick than anything else, cooing female backing vocals, a deliciously nasty vocal turn from Tom Anselmi, and a chorus that still delivers thrills and chills.

If bringing that one song to light again was all this comp accomplished, that would be enough. But Schneider has found more. Much more.

Also from the file of lost classics is Bob Wiseman’s “Gabriel Dumont Blues,” found on his out-of-print second album, Presented by Lake Michigan Soda, perhaps his finest solo record. Crash Vegas are a band that have undeservedly slipped into the dustbins of history—not one of their three albums is in print—while Colin Cripps is the newest member of Blue Rodeo, and Michelle McAdorey is working on a new solo album with Greg Keelor; their 1989 song “Movin’ Too Fast” appears here in a rowdy live version. Though 13 Engines had their earliest albums reissued a few years back, but they’re once again unavailable; their 1988 campus radio hit “Beached” is here. And the Local Rabbits song “Play On,” which provided the book with its epigraph, is available for the first time in over a decade.

Some tracks are not exclusive to this comp and still available elsewhere, but it’s striking, contextually, to hear the prog-punk of NoMeansNo and the sound of Sarah Harmer rocking out in Weeping Tile and the title track to Change of Heart’s opus Smile all in one place.

Then there are alternate versions of well-loved songs: Sloan offers a scrappy early live recording from when they were still a grunge band; there’s a raw full-band demo from the normally meticulous and pristine Jane Siberry; and the Grapes of Wrath contribute a startlingly lovely 2000 acoustic version of one of their earliest songs, “Misunderstanding.” Entirely unheard-until-now songs are here from the Skydiggers, Pursuit of Happiness, and the notorious Toronto band A Neon Rome, whose legend is greater than their actual musical output (arguably, the track here, from their long-lost second album, shows why—but this was always a live band first and foremost).

Being a diverse collection, naturally some tracks don’t deliver. The Pursuit of Happiness track, “Wake Up and Smell Cathy,” is one of songwriter Moe Berg’s lamest double entendres. The pre-Cowboy Junkies band Hunger Project is a patience-tester, though no more so than any similar Siouxie and the Banshees track from the same time period, which they were obviously trying to emulate. And while I’m a big fan of Montreal’s Rational Youth, one of the first decent synth pop bands in Canada, their track here, “To the Goddess Electricity,” finds their Kraftwerk worship more than a bit imitative: this track is a dead ringer for “Neon Lights” (not entirely a bad thing).

With any project like this, the obvious question is: does the material hold up? Will a new generation be interested, or is this just for that smallest of all demographics, collectors of Canadiana musical artifacts? The answer is clear from the opening notes of the title track from 1985, and by the time the Local Rabbits’ wistful 1995 ode to fellow rock’n’roll travellers concludes, the listener has been on a rollercoaster ride providing an alternate history of Canadian music, one far outside the purview of David Foster, Bryan Adams and Celine Dion—and even one outside The Tragically Hip, Blue Rodeo, and other heroes of the book that inspired the project.

Even I—as a co-author of said book—discovered things I’d never heard before while listening to this. No matter what you think you know about Canadian music, this record will teach you much more. (Nov. 22)

Posted by mmmbarclay at 3:10 PM

i appreciate your blog tremendously; i've "discovered" so much good music through your site (Destroyer being my favorite); not everything that is recommended appeals to me (eg. tuneyards) but your site gives me a great launch pad to try out new artists
i do have one question however: why was Half-moon Run's "Dark Eyes" not reviewed? i really think it was one of the best albums in 2012!

Nice job!
I wish you could have got a track off 'Jr. Gone Wild's Less Art More Pop!" That is the best lp ever made by a Canadian band.