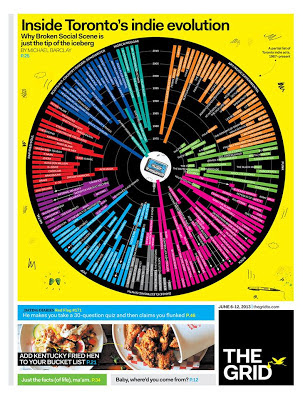 This week I accepted an exciting, though inherently vague, assignment from The Grid in Toronto, about the history of independent music in Toronto, pegged to the Arts and Crafts anniversary show this weekend.

I touched on this subject in Have Not Been the Same, written when I was still (relatively) young and naïve, a mere 30 years old, having grown up in a generation when alternative culture truly did seem worlds away from the mainstream. I thought everything popular came out via large corporations, and most everything interesting through smaller channels. Why wouldn’t I? It had been that way my whole life, starting in the 1970s. Indie music, to me, meant Shadowy Men and Og Records and Mint Records and Cargo Records and Murderecords (celebrating 21 years at a NXNE show next Friday, featuring Sloan, Super Friendz, Mike O’Neill).

Now I recognize some inherent flaws in the narrative I had imagined 13 years ago.

I had no idea at the time, for example, that Rush was—and is—an independent band, who not only self-released their debut album (the one with “In the Mood”), who not only own the masters to everything they’ve ever recorded (licensed to various majors around the world), who not only own Anthem Records, but who also signed a wide variety of Toronto artists to Anthem over the years (Ian Thomas, Moe Koffman, Boys Brigade, Max Webster, FM).

I had some idea, but not really, that True North was a fully independent label that enjoyed major label distribution (CBS/Columbia) from the beginning, in 1970. I also didn’t really think about labels like Current, home to the Parachute Club and Martha and the Muffins, who actually shopped each album to various majors on a project-by-project basis (though RCA handled both those acts). I really had no idea that Daffodil Records, home to Crowbar, Klaatu and A Foot in Cold Water, even existed: it was an indie label operating out of the EMI offices (not unlike Arts and Crafts’ early days). There are other national examples too, like Aquarius in Montreal (April Wine, Corey Hart) and Mushroom in Vancouver (Heart, Chilliwack).

Those are the bigwigs, the indies that helped build the Canadian music industry and showed real entrepreneurial spirit, taking huge gambles that paid off.

Many artists discussed in Have Not Been the Same have tales of being neglected by the major labels by whom they were eventually scooped up. Promo budgets and tour support dried up; labels would quickly lose interest after a second album. Part of me thought that was probably all true; part of me thought there was a lot of whining, of blaming someone else for your lack of success.

In my Grid piece, I argue that even Canadian bands signed to majors had to work their ass off to get noticed—case in point being the Diodes, who were the toast of Toronto’s fledgling punk scene and got signed to CBS Records. Their sniping punk peers thought they had sold out and were sitting pretty, when in fact nothing at all came easy to the band signed at the height of what was seen as an easily-dismissed trend. For further reading (even if, like me, you don’t even like Toronto’s punk bands), I highly recommend Liz Worth’s book Treat Me Like Dirt.

I contacted Diodes manager Ralph Alfonso to fact-check my impression of the band’s struggle inside the corporate structure, knowing that he has also run his own record label, Bongo Beat, for the last 16 years, and has worked at every level of the industry.

His generous response contained more historical revelations for me:

“I have an interesting perspective on this because I was management working with not only a punk band (Diodes) but also later with Honeymoon Suite and Brighton Rock; I also worked with EMI and Warner Canada as the Canadian product manager at each label in addition to being head of press and promotion at one of the biggest indie labels in the ’80s, Attic Records (I was Anvil's publicist, among many other things).

“Generally speaking, in the ’60s and ’70s, with the exception of RCA and CBS, the international labels based in Canada could not sign Canadian artists without U.S. approval. RCA and CBS, although they could sign Canadian artists, could not guarantee them an international release (still the case with all the majors). At some point in the ’80s, Ottawa put in CanCon requirements for the major labels (with the exception of Capitol) in that each label had to invest in Canadian talent either through a percentage of local signings or making their distribution systems carry local labels and artists. It was different for each label and is still in effect to some degree to this day, although no one really will talk about it.

“When I was working at Warner, I was constantly counting the number of Canadian artists (both signed and on distributed labels), although I was never told why at the time.

[ed. note: This reminds me of King Cobb Steelie’s Kevan Byrne explaining to me in 1997 why EMI granted the band their own vanity label, Lunamoth, which happened shortly after Nettwerk dropped EMI as their distributor; he said EMI needed something new to Nettwerk’s place, and the specific reason why is more clear to me now.]

“The prevailing label culture of the day at the majors (although not at Capitol) [ed. note: run by Deane Cameron, widely recorded as a mensch in the industry] indeed was that Canadian signings were a pain in the ass and didn't sell. A direct signing meant incurring production costs, photo shoots, album design, signing advances, promotional expenses and more. Releasing a U.S. artist cost pretty much nothing; just the costs of manufacturing and the regular promo stuff. In the late ’80s, MuchMusic helped create Canadian stadium stars and the labels got more aggressive (funny what platinum sales will do).

“The Canadian artists with strong management that took charge and augmented the label's efforts with their own resources did well (Blue Rodeo, for example, used indie radio pluggers to push "Try" to gain momentum). That will always be the case, especially now that the majors have been decimated, there is a whole network of outsourcing that's sprung up to deal with the lack of resources at the majors (and indies).”

The one thing I regret about the Grid piece, 24 hours after I viewed the final edit, is that I feel like I’m implying there was a “false dichotomy” between majors and indie between the ’70s and ’90s. I think there absolutely was a dichotomy: one existed primarily to make money with artistry increasingly a secondary concern; the other placed artistry first, regardless of genre or potential for popularity, and often struggled to get by. Obviously both camps are populated by entrepreneurs, but the music coming out of each channel was, more often than not, decidedly different. It could be argued at the time that “indie” was indeed a musical strain of rock music.

Nowadays, of course, the false dichotomy is entirely confined to the “indie” world; now I can safely assume 90% of current major-label output does not interest me at all (20 years ago they still put out a lot of good records). But “indie” as a musical descriptor means absolutely nothing—Stars? Metric? My beloved Arcade Fire? Those are all classic rock or pop bands aiming to be broadly popular. There is nothing either underground or alternative about them. (I'm not saying there should be. But it’s not like Stars fans are running out to buy Colin Stetson records.)

And then there is the argument that Arts and Crafts, with its dominant position, major label distribution, and influence in the industry—most, if not all, of its acts routinely get grant money (A&C’s Jeff Remedios, it should be noted, is also vice-chair of the FACTOR board of directors)—can hardly be labelled an indie label on par with the real mom-and-pop operations like Daps or Out of This Spark or Rat Drifting. So—what? Of course they exist on a different plane, and yes, perhaps our grant system is far from ideal, maybe even nepotistic. But Arts and Crafts is an independent label, owned by three people (Kevin Drew being one of them, new partner Kieran Roy the other), and well-staffed. There’s nothing preventing other label owners from achieving the same status, with the right combination of artistic talent, hard work, shitloads of luck—and yes, connections, which are not entirely unattainable in a town as tiny as this, especially if your artists are striking a chord. (And if they aren’t, well, it’s ultimately impossible to tell whose fault that is, taste being what it is.) And Arts and Crafts has far from a perfect track record: the flops, both artistic and commercial, outweigh the massive successes. Say what you will, they take risks.

What I love about The Grid piece is that a) they trusted me to write whatever I wanted, and b) encouraged me not to focus just on what is loosely called “indie rock.” Because to me, independent music in Toronto is Bruce Cockburn, Stompin’ Tom Connors, Lillian Allen (oh, how I loved getting into Revolutionary Tea Party again—still so fucking powerful), John Oswald, Shuffle Demons, Maestro Fresh Wes, Final Fantasy, The Weeknd et al—and, frankly, discovering Sackville Records (’70s jazz label put out Toronto folks as well as Jay McShann, Anthony Braxton and Archie Shepp), Music Gallery Records (thank you Aaron Levin and David Dacks) Sacrifice (’80s speed metal) and Ishan People (’70s reggae), all of which I’ll admit I was completely ignorant.

Speaking of ignorance—mine and others—I know there will be griping about who is and is not mentioned in this article. To which I say: you try condensing 40 years of diverse musical history in such a culturally rich city as this in the space of 2,000 words written for a general audience. The fact is that we simply have too many goddam success stories in this town.