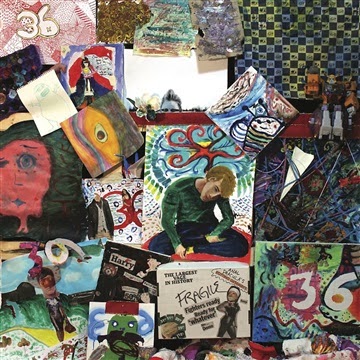 Calgary’s Taylor Cochrane is 25 years old. This is his fifth album as 36?. It sounds like several lifetimes in one. Cochrane’s youthful exuberance is palpable, as is his talent. As per his perplexing band name and album title, Where Do We Go From Here sounds like a confusing mess on the surface. It’s not. It’s actually one of the most refreshing and inventive Canadian rock records in a long while.

Cochrane delivers ambitious and anthemic alt-rock, psychedelic textures, weirdo electro-pop, folkie detours and a three-part suite of ambient noise: the kind of mix tape or open-format radio show no one makes anymore. That all-out noise excursion aside, Cochrane writes great pop songs, and then throws everything he can at them to see if they survive. There’s no indication here what instruments Cochrane or his bandmates Eric Svilpis and Scott White handle individually; it’s safe to assume there are no slackers on board. Drummer Ryan Kusz gives it all muscle that prevents everything from drifting apart: in the middle of the eclectic experimentalism, this is a rock band. It also helps that Cochrane is no vocal slouch either: when he goes for those high notes that all emo boys attempt, Cochrane actually pulls it off. Nineties campus radio fans: imagine Neutral Milk Hotel’s Jeff Mangum joining Change of Heart circa Smile.

What’s next for this band? Taking their show on the road, coming to Ontario in May, and apparently a plan to rerecord this album with household objects and acoustic instruments. Why would they do that? Like everything heard here: just because. (March 13)

Unrelated tangent: With the sole exception of Chad Van Gaalen, 36? may well be the only musical act from Calgary I've ever loved. I've yet to be convinced otherwise. 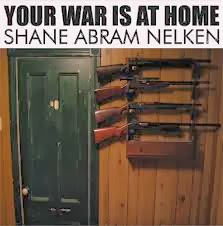 Shane Abram Nelken – Your War Is At Home (independent)

Even the most miserable, self-loathing loser needs a song—or 12—to soundtrack their second-guessing and anxiety during endless nights of insomnia. The man to sing those songs is Shane Abram Nelken, a Vancouver singer-songwriter who surely takes no solace in being called “underrated” and “overlooked”—to say nothing of “outright ignored.” He released two albums in the past decade under the name The Awkward Stage, two albums that were bursting with smart, funny, melodic songs that owed small debts to Nick Lowe, Joe Jackson, and Nelken’s own pal (and former employer), the New Pornographers’ A.C. Newman. No one cared (except Mint Records). They should have.

Nelken opens his new album boldly stating, “I have learned nothing.” The next song opens with the line, “These songs are the flailing arms of one who’s drowning.” The third song? “There reflected in your haunted look / is a pile of burning books.” The common thread here is burned bridges and a lifetime of regret. In less talented hands, it could easily be a bitter bummer, if not downright poisonous. Yet Nelken writes mostly major-key melodies so catchy they could double as Christmas carols, making the bite underneath that much more satisfying.

Yes, he can be morbid (“It’s so much harder to ask for help  / than it is for some to lay beneath the plough”), but it’s always delivered with musically rich arrangements worthy of Laurel Canyon country records, soul ballads and, on one song, a spy movie theme. Nelken spends more time in 3/4 than most other songwriters, and several tracks owe an odd debt not to the blues exactly, but specifically to the Beatles’ “She’s So Heavy.” Because I know for a fact Nelken scrounged every last penny to make this record (full disclosure: I chipped in for his Kickstarter campaign), it’s a small wonder that the production sounds like a million bucks.

Nelken’s narrators have all had life bite them in the ass. Damn straight, they’re angry—mostly with themselves. But to Nelken, those travails are never a reason to throw in the towel; they’re just as worthy of the elegance, craft and empathy most people only bestow on much more agreeable subjects. (March 13)

Download: “Busy Losing Somebody New,” “I’ll Tear Your Heart Out,” “Spent the Morning Making Her Cry”

Posted by mmmbarclay at 5:47 PM