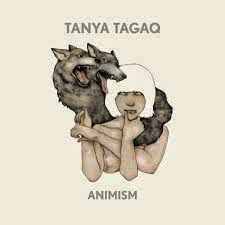 Only a poet of the highest order could attempt to successfully encapsulate the music of Tanya Tagaq. (I am not that poet.) Inuit throat singing is merely her launching pad for sound poetry, electro-acoustic exploration and the calls of the wild. Of course, it’s much more than that. And less.

Much of Tagaq’s power comes from her live performance, where the act of unearthing alternately beastly and beautiful sounds is a powerful, astounding and often disquieting experience. Hearing her disembodied voice in the comfort of your home or through headphones packs considerably less force. This is music from a mystical, mysterious place, and hearing it out of context—which is pretty much anywhere—is odd. In that sense, Tagaq has more in common with the likes of Diamanda Galas than she does with other avant-garde artists that skirt close to mainstream radar: Mike Patton, Colin Stetson, or Bjork (who gave Tagaq her first big break, on the 2001 Vespertine tour). You don’t meet Tagaq halfway: you’re either in, or you’re out.

That said, Animism opens with two tracks that mark a move to middle ground. One is a cover of the Pixies’ “Caribou,” rendered as a majestic, powerful manifestation of an urban creature longing for the wilderness—in Tagaq’s hands, the lyrical message comes through much more clearly than the original. She closes it with a series of howls, uttering the word “repent,” that put to shame anything ever barked by Black Francis. The other is “Uja,” a track that owes as much to metal as it does EDM as it does to—well, to nothing in particular.

The origins of Inuit throat singing are as a joke, a game between two women. There is an element of it that lends itself to the comic—though surely that’s not what Tagaq had in mind on the closing track, "Fracking." It’s obviously meant to be a powerful aural metaphor for the controversial process of extracting natural gas from shale rock—and yet it sounds like a parody of performance art, devoid of any subtlety or poetry. It’s meant to be ugly; it is, in fact, ugly. Another track, unambiguously titled "Fight," likewise aims for a visceral punch and falls flaccid instead.

Tagaq is an intense and creative artist. What she does with what could be a novelty or a limited palette—much like, say Colin Stetson’s circular breathing and saxophone arpeggios—is astounding. Even when her experimentation doesn't fully click, her bravery and courage are unassailable..

Tanya Tagaq’s live score to Nanook of the North tops a can’t-miss double bill with Buffy Sainte-Marie at the Luminato Festival on June 10, free at David Pecault Square, 8 p.m.

Note: Tagaq's interview on CBC's Q was incredible for many reasons. Mostly because after she tells Jian Ghomeshi that she "gives zero shits what people think," he offers an awestruck, almost disbelieving response: "Wow." Hard to believe, isn't it? An artist fully secure in her beliefs and artistic vision, immune to and disinterested in media perceptions.

Posted by mmmbarclay at 9:32 PM