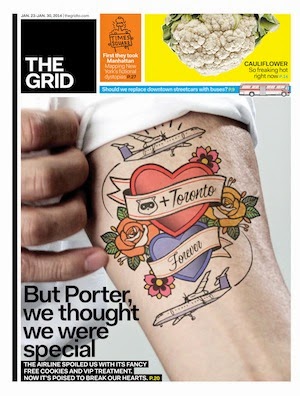 Toronto weekly The Grid published its last issue yesterday. Many mourned, but surely no one was surprised. The Grid was the 2011 incarnation of Eye Weekly, started by the Toronto Star in 1991, after numerous failed attempts to take over and/or challenge the dominancy of Now Magazine. (Now has had a major hate-on for the Toronto Star since forever, exemplifying the acrimony between Liberal and NDP partisans despite much common ground.) Neither Eye nor The Grid ever had an ad base that came close to matching that of Now; both TorStar properties bled money since day one. No amount of talent and reinvention could change that—this week’s death notice was decades in the making.

I wrote for Eye Weekly from 1999 to 2004; I landed there after my own southwestern Ontario alt-weekly went bust. Some of my favourite writers and editors were at Eye: Mary Dickie, Denise Benson, Liisa Ladouceur, Jonny Dovercourt, Tyler Clark Burke, and one of my favourite music writers ever, from anywhere: Stuart Berman. Many more friends were contributors and editors. It was an exciting place to be—especially in the early 2000s, when Toronto was engaged in a new sense of discovery and confidence, which Eye seemed to be more excited about than stodgy old Now did. Wavelength and Three Gut Records, among other projects, were born in the Eye offices.

I didn’t understand Eye when it first came out. It consciously railed against the self-important, earnest and politically sensitive Now Magazine; I was very self-important, earnest and politically sensitive at the time. Eye was far too snarky for me. It was also too drunk: editor William Burrill appeared to revel in the mythology of Hunter Thompson and Ernest Hemingway, as much for their lifestyle as their writing. (Hero worship of either is a major turn-off for me.)  And yet I realized that Eye provided a valuable counterpoint, especially when Now’s music section was written entirely by three people. The Three Kings, I called them: Kim Hughes, Tim Perlich and Matt Galloway. They were all fantastic in their own way (yes, even Perlich, my nemesis). But Eye had considerably more variety and, in retrospect, more exciting writing.

Eye was the scrappy underdog. Ironic, of course, considering it had corporate funding, while Now was the up-from-the-bootstraps capitalist success story. In Now, everything felt Important. In Eye, everything felt Fun. The city needed both.

The Grid was a considerably different magazine. (I did some writing for it in the past year, including this cover story.) It was also beautiful: for three years, the international Society for News Design named it one of the best designed newspapers in the world. Its editors left jobs at much higher-profile magazines to shape The Grid. But arts coverage was slowly clawed back. Food, fashion, family and condo life took over; it was increasingly hard to tell Toronto Life and The Grid apart. It certainly wasn't trying to compete with Now anymore. Not necessarily a bad thing, but Now is no longer an essential read, either; one could argue that Toronto lost both its alt-weeklies a while ago. That also has as much to do with the blurred lines between what was once a decidedly alternative culture and a monolithic mainstream. Is there anything at all in an alt-weekly you don’t also read in a daily paper? Don’t even get this dinosaur started on Ye Olde Internet, The Great Destroyer. The opinions expressed in alt-weeklies used to matter, they used to spark discussion, they used to define a community; now they’re just part of the noise.

Perhaps that’s why The Grid placed so much emphasis on the visual: unlike everyone else everywhere, they wanted you to read the print edition. Even someone like me, who likes 5,000-word articles and doesn’t normally give a shit if something is better designed than the static stability of The New Yorker, appreciated what mischief The Grid was up to. The appeal wasn’t entirely aesthetic, of course: the writing was still very strong, whether it was by freelancers like Denise Balkissoon and Jason McBride, regulars Sarah Liss and Denise Benson, or municipal columnist Edward Keenan, who provided intelligent, articulate sanity during years when City Hall had none of it. Everyone in town had an opinion of Rob Ford; Keenan was—sorry, still is—one of the only writers to see the bigger picture.

I don’t know that I lament the loss of The Grid per se. I’m heartbroken for my friends who work there. I will certainly miss having an alternative to Now, one that’s written by professionals. Ultimately, the loss is that a place with so many talented people all in one place could not survive. So many incredible writers, editors, designers: all now looking for work, competing with victims of CBC cuts and newspaper layoffs, all in an industry that doesn’t have any money and can’t figure out how to make it. We know we can build great things. We don’t know how to monetize it. This is no time to celebrate. I’m fascinated to find out how all that creativity will be channelled. Because it’s not just going to fade away.

*apologies to Chandler Levack
Posted by mmmbarclay at 11:49 PM