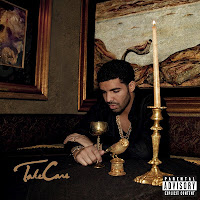 First impression (published Nov. 24, 2011, in a joint review with Nickelback):

…Wasn’t Drake that charming young man who hosted the Junos? Isn’t he a well-adjusted TV star from a tony Toronto neighbourhood? Isn’t Stevie Wonder on this new album? Isn’t his new single with Nicki Minaj, called “Make Me Proud,” supposed to be an empowering ode to the fairer sex?

Drake can play the sensitive guy all he wants, but his lyrical output is nothing short of vile, a portrait of a guy who is “addicted to naked pictures and sittin’ talking ’bout bitches,” and who loves breast-implanted strippers even more than Chad Kroeger does. It’s not like he hides this part of his personality: on the first track, “Over My Dead Body” (with music by Chantal Kreviazuk), Drake goes on about his six-figure salary, white women, and gives a bizarre “shout out to Asian girls / let the lights dim sum.” As an opening salvo, it doesn’t bode well. It’s actually one of the better tracks here.

“I don’t make music for niggers that don’t get pussy,” he claims, a throwaway line that would be more offensive if it wasn’t so ridiculous—especially over decidedly unsexy beats. What’s actually offensive is how much insipid whining he does about his broken heart, like a crybaby emo teenager instead of the supposedly macho playa that he pretends to be on 80 per cent of the tracks here. His defenders claim that dichotomy is part of his appeal; mostly he sounds like a two-faced hypocrite. “I know you’ve been hurt by someone else,” he pays his ex-girlfriend Rihanna to croon to him on the title track. I’m sure it wasn’t her idea.

Drake’s dry delivery throughout—when either singing or rapping—is devoid of charisma and impossible to take seriously. That doesn’t stop him from aiming for maximum gravitas at every available opportunity, especially on the eight-minute drunk-dialling epic “Marvin’s Room.” It’s ostensibly a Marvin Gaye homage (?) about a jilted lover cursing his ex’s new partner. But the lyrics are downright laughable: he croons softly in the chorus, “fuck that nigger that you love so bad,” calls his lover only after he’s been left alone by all the bitches he invited over to party, and he boasts about having sex four times that week to help him get over his pain and adjust to fame. What a charmer.

"Marvin’s Room" is made worse by Drake’s earnest, AutoTuned vocals, which are shamelessly trying to ape his protégé The Weeknd—an artist who, on his own records, nails the fine line between distasteful decadence and self-loathing better than Drake could ever dream of doing. (Plus, Abel Tesfaye of The Weeknd can actually sing.)

So why does Drake get such a free ride, not just from his audience but from respectable mainstream media? Is his million-dollar smile really so blinding that we can overlook his countless shortcomings? Speaking of millions of dollars, listening to Take Care—what a condescending title, by the way—is like enduring 70 minutes listening to Marie Antoinette blather on at the precipice of the French Revolution. Do regular schmoes listen to Drake for the same deluded and self-defeating reason that poor people vote Republican?

Even worse—Drake doesn’t make it sound like his life is any fun at all. Say what you will about Nickelback, they’re having an amazing time being kings of the world and don’t care what you think…

--I’ll admit that some tracks on this album have grown on me since I’ve subjected myself to this album on endless rotation as part of my Polaris duties. So let’s focus on the positive for a second: the first voice you hear is not Drake’s but Chantal Kreviazuk, an artist I’ve never cared for until now, when she offers respite from Drake.

--That opening track, “Over My Dead Body,” has one line I’ll admit is pretty good: “Jealousy is just love and hate at the same time.”

--The first five tracks on Take Care are tolerable, if not pretty good. I respect Drake’s decision to downplay the beats, which is almost heresy in hip-hop. There are no drums at all on “Over My Dead Body”; Shot For Me has little more than fingersnaps on the verses. The opening suite culminates with the title track, produced by Jamie “xx” Smith, based largely on his remix of a track from the final Gil-Scott Heron album; obviously, it owes a large debt to The Xx, featuring guitar by Romy Madley-Croft (surely the only woman on this album who isn’t singing), but Drake also manages to get the most honest, emotional vocal performance out of Rihanna—perhaps ever. The first two minutes of this track, before Drake steps in, is completely sublime.

--As much as I hate Drake’s flow and his vocal timbre, I have to admit that it actually works on “Headlines,” and the drum programming is superb. The drums are even better on “Crew Love,” probably this album’s production high point, and featuring a vocal by The Weeknd.

--The production on “Marvin’s Room” could have been done by Grimes; as much as I loathe this song in general, again, I have to respect that Drake is reaching for something different here.

--I’m mysteriously intrigued by this line: “Slave to the pussy but I’m playing the field nigger.” Is there supposed to be a comma between “field” and “nigger” or is he purposely baiting anyone whose studied African-American history? I’m not sure this is worth expending any energy trying to decipher.

--On track 12 (when there’s still 1/3 of the album left to go, people!), “Doing it Wrong,” Drake finally sounds like he’s singing in his own voice, not run through a thousand machines. Did the fact Stevie Wonder shows up to play some plaintive harmonica here make Drake want to step up on the soul quotient? Wonder’s presence is the most incongruous element on this entire record: absolutely no one has played harmonica in any genre in the last 30 years, except maybe Beck when he was trying to do Dylan, and so it’s a strange, archaic moment in this otherwise entirely 21st century recording to hear that old familiar wheezing sound.

--I love downer records. I love that this is a relatively minimal, atmospheric record flying in the face of overproduced mainstream hip-hop. But if Drake was merely drowning in his own misery, that’d be fine. Instead, the fact that he—or his narrator—is such a pompous ass in love with conspicuous consumption makes it impossible to relate to him on any level at all, or even enjoy him vicariously. He’s a spoiled, whiny motherfucker, and spending 80 minutes with him is torturous.

--Eighty minutes—that’s far too long for any album, but especially Drake. Has anyone other than masochistic Polaris jurors ever sat through all 17 tracks in one sitting?

--I hate everything about both his singing voice and his flow as an MC; he has zero personality as a vocalist. It would be one thing if he faded into the background as just another element of the music, ala Massive Attack (where the raps are the weakest link), but this is all about Drake, all the time. Hating his vocals is, of course, entirely subjective, but: “All those flows borin’ me / paint dryin’.” Hey, you said it.

--Those first five tracks I like hit a brick wall with track six, “Marvin’s Room.” Playing a jilted, drunk ex-lover, he croons “fuck that nigger you love so bad” as a chorus, and sounds suitably ridiculous doing so, with loathsome delivery. Is there a woman in the world who finds this endearing? What is it about the fact he fucked four bitches before pleading with his ex like a jealous, jilted dick, that people find sexy? Is there a man in the world who wouldn’t find this song whiny and humiliating? I almost feel embarrassed for Drake listening to this. “I’m just sayin’, you could do better.”

--Here’s the heartwarming verse in question: “I think I’m addicted to naked pictures and sittin’ talking about bitches that we almost had / I don’t think I’m conscious of making monsters out of the women I sponsor until it all goes bad / but it’s all good / We threw a party, yeah we threw a party / bitches came over, yeah we threw a party / I was just calling because they were just leaving / talk to me please… / I’ve had sex four times this week, just sayin’ / I’m having a hard time adjusting to fame.” Cry me a fuckin’ river, pal.

--The first line of “Crew Love,” as crooned by The Weeknd, is, if I’m not mistaken, “Take your nose off my keyboard.” WTF?

--“Make Me Proud” is supposedly his sensitive-guy shout-out to the fairer sex. Drake is so proud of his lady because … her hair looks good when she comes out of the shower? Because “she sounds like” she graduated college? Because she has the internal stamina to stave off horny jackals? When Nicki Minaj takes charge halfway through, she injects the track with so much life it doesn’t matter that she’s barely saying anything—it’s all in her delivery. The woman has sheer charisma and can get away with talkin’ shit in the middle of a puzzling, patronizing track from a guy trying to prove he’s not a total dick. And that octave-jumpin hook? Juvenile—save it for your Crazy Frog collab.

--The drummer on the overblown, choir-laded bombast of "Lord Knows" insisted that his credit read in part “of www.indiestudiodrummer.com”

--It’s hard to pick the worst verse on this album, but my vote goes to this one from “Lord Knows”: “I’m a descendent of either Marley or Hendrix / I haven’t figured it out because my story is far from finished / I’m hearing all of the jokes I know they’re trying to push me / I know that showin’ emotion don’t ever mean I’m a pussy / I don’t make music for niggas who don’t get pussy.”

--Even his guests sink to new lyrical lows, like this one from Rick Ross: “I fell in love with the pen, started fucking the ink.” Let's all meditate on that for a second. Or not.

--Just when you think it couldn’t get any worse, final track "The Ride" features this doozy about his latest conquest: “Brand new titties, stitches still showin’ / she’s just praying that it heals good / I’m just praying that it feels good.” He later admits, “I blew six million on myself and I feel amazing.” Bully for you, buddy. Go hang out with Mitt Romney; I’m sure he’s a big fan.

The Polaris money wouldn’t even cover a weekend with his buddies: “There are times when I might blow 50k on a vacation for all my soldiers just to see the looks on all their faces / all it took was patience / I’ve never really been one for the preservation of money.”

Posted by mmmbarclay at 9:31 AM