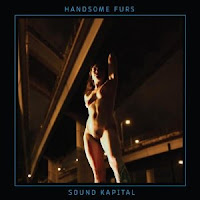 Handsome Furs’ Dan Boeckner and Alexei Perry have spent the last two years touring almost every corner of the world, especially the ones that few other Canadian bands dare to tread: Azerbaijan? Burma? Lebanon? Check, check, and check. They’ve learned that the unifying global music is not rock’n’roll—it’s synth pop that blares out of basement clubs, taxicabs and storefronts the world over. And so Boeckner sets his guitar aside for most of Sound Kapital, and joins Perry in programming the synths and drum machines, making the kind of joyous, abrasive and raucous music that the likes of Kraftwerk, Suicide and even Depeche Mode could never have visualized.

Anyone who loved his now-disbanded group Wolf Parade knows that Boeckner writes killer songs and is a powerful howler of a rock singer. In Handsome Furs, he still highlights those strengths while he and Perry dive deep into sound sculpting. Their 2009 album Face Control featured some of the most delicious guitar sounds put to tape in recent memory, contrasted with harsh synths and deep drum machines; here the guitar is only a texture, taking a back seat to icy Europop synths that Lady Gaga would love to get her hands on. (The album was mixed in Finland and Berlin, for whatever that’s worth.)

Sound Kapital isn’t as jam-packed with hooks and riffs as Face Control was, but it’s a different, darker beast. Boeckner takes more pointedly political turns than ever before, singing in a voice of the disembodied and disenfranchised about the “damage of the Western world,” vowing to “never be repatriated,” railing about how “you don’t serve the people” and asking “what about us?”

--Dan Boeckner has a voice of rock’n’roll longing, of the nervous, twitching small town guy who can’t wait to see the world. He has that rockabilly yelp in the back of his throat, the kind that when you hear on oldies radio driving late into the night. “I feel low, but I feel all right”—that sums up the redemptive power of rock’n’roll right there.

--“When I get back / I won’t feel the same anymore,” he sings, like the guitar-loving punk who finds himself playing in squats in former Soviet republics and learning that the sound of revolution over there is tinny techno pop that Lady Gaga would love. When the punk gets back home, he channels that into his own sound.

--Even if you didn’t know what stamps this band has on their passports, they paint vivid pictures both musically and lyrically of their travels: “Get me drunk when the sun comes up / over socialist tower block / with the cigarettes and the terrible weather”

--“Cheap Music” is an anthem for a new global, budget-minded revolution rock, cut off from the past and ready to forge a future by any means necessary: “No nostalgia on the stereo / No hits coz there’s no radio / no replacement, no replacement / a thousand lonely kids making noise in the basement.” This song is the kind of rallying cry that most rock’n’rollers are too jaded and cynical—or, conversely, too earnest—to write effectively anymore.

--“Damage” sounds like ’80s Vancouver neighbours Skinny Puppy and Colin James actually decided to get together one night over a few lines of cocaine and get it on. And may that be the only time those two artists ever get namechecked together.

--Though primarily a synth album, the guitar sounds are fantastic, rich and nasty—and you barely notice they’re there unless you’re looking for them.

--At a time when everyone feels disenfranchised from everything, Handsome Furs sum up the zeitgeist in simple phrases, giving voice to those feeling left behind: “What about us?” “You don’t serve the people.” Sound Kapital is a place where the economy is bust, where the leaders can’t be trusted, where sex, drugs and rock’n’roll really are the only salvation and source of sanity.

--“What About Us?” has not only some of the best lyrics of the album (“They’re an army of thieves, they’ve got everything they need / but what about us?”), but the final third of the song keeps the beat while lowering the intensity and taking the song somewhere else entirely.

--The three-song punch of “What About Us?,” “Repatriated” and “Cheap Music” is perhaps my favourite sequence of any of the albums on the shortlist

--The entire first side drags: the programming relatively uninspired, the melodies merely okay; the power ballad “Serve the People” and the opening anthem “When I Get Back” each achieve only half of the gravitas they’re aiming for. This record really only comes alive on side two.

--For all the talk about how “nostalgia never meant much to me,” Boeckner is consistently singing over synthesizers that don’t sound any newer than 1992.

Things I’m not supposed to consider:

The band announced their breakup a few weeks before the Polaris long list was announced. Should that matter? Either way, by Boeckner standards, this is merely a pretty good album. The previous Handsome Furs album, Face Control, was a top-to-bottom electro-rock masterpiece, and I still consider it one of the greatest crimes in the short history of Polaris that it didn’t make that year’s shortlist. The new album by Boeckner, as Divine Fits, is just as thrilling, if not more so. Sandwiched between those two records, Sound Kapital is a poor, backwater cousin, despite its consistent conceptual thread. On the other hand, Boeckner is one of this country’s greatest songwriters of the past decade—and also the most underappreciated. He deserves some kind of award doesn’t he?
Posted by mmmbarclay at 10:01 AM