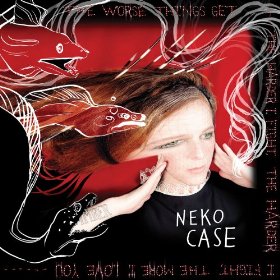 My interview with the always lovely and inspiring Neko Case ran as a Q&A at Maclean's here. Her new album is out today. Having just played Toronto in July, there is no local date planned until the new year.

When you’re mired in the depths of despair, the sound of an empathetic voice is a saviour. What happens, however, when that voice falls prey herself to the black dogs of depression? Neko Case is the last person in the world to turn into a confessional, self-pitying singer-songwriter, and she’s not about to start here. Her sixth solo album undoubtedly draws on some of her recent personal battles (starting with the death of both parents, from whom she’d been estranged for most of her life), but that’s something she’s chosen to share with her audience in interviews—it doesn’t emanate from the lyrics themselves without that information. Even when she sings “I wanted so badly not to be me,” it’s not out of character with any of the fictional characters she’s always written about, people searching for identity and ownership in a transient, unnatural world.

Case’s narratives have rarely, if ever, been straightforward. Much more so than any of her country or pop colleagues who alternate between the literal and the non-sequitur, Case embraces poetry and imagery; her open-ended narratives lend themselves to a variety of interpretations. And yet key lines throughout The Worse It Gets convey a theme of resilience, of survival, of being one’s own worst enemy and rising above it. With a voice filled with steely resolve, Case sings of her own emotional armour: “I revenged myself all over myself / there’s nothing you can say to me.” The lady might have been down, but she’s still tough as nails.

Though she continues to excel at haunting, evocative torch songs and balladry, her approach to which—much like her lyrics—is unlike any of her peers, she also delivers one of the most straight-ahead rock’n’roll songs of her non-New Pornographers career, with the defiant, gender-baiting declaration of “Man” (“I’m a man / that’s what you raised me to be”). Elsewhere, her penchant for sad waltzes remains, as does her almost pastiche approach to verse-chorus-bridge structure.

Trusted confidante Kelly Hogan plays an integral role on harmonies, illustrating the advantage a real live backup singer brings to an already great performer, rather than multi-tracked layers of the lead voice. Members of My Morning Jacket, Mudhoney and Calexico all make appearances, as do M. Ward and A.C. Newman, but it’s Steve Berlin of Los Lobos who adds surprising saxophone punch to several tracks, including the triumphant closer, “Ragtime.”

The show-stopper, however, is an a cappella piece that bisects the record (“Nearly Midnight, Honolulu”), written spontaneously after Case witnessed an abusive mother at an airport. It’s addressed to the child, and is written—and sung—in a voice of not just sympathy, but obvious empathy. Case has always had a voice that provides both inspiration and comfort, but never more so than here, where she is quite literally encouraging a broken child to stand tall and rise above her circumstance. Considering the lyrics are pure documentary, they function brilliantly as poetry; and as an a cappella piece free of any traditional structure, Case’s musical abstraction only enhances the lyrics. Even at the album’s most direct and depressing, Case transforms the moment into one of empowerment. Hell, even the presence of a dour Nico song (Neko does Nico!) doesn’t drag the album down; on the contrary, it’s gorgeous—of course.

We only get a new Neko Case album every three or four years; her fans are noted for their “glacier’s patience.” But it usually takes that long to fully digest each one, and The Worse I Get is not necessarily her best (it’s hard to top the perfection of Blacklisted or Middle Cyclone) but certainly the most musically and emotionally complex album in her catalogue.

Posted by mmmbarclay at 2:32 PM