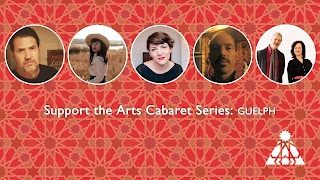 I haven’t been to a live show in three months. That’s the longest period of time in my life, since I was 14 years old, that I haven’t waited in anticipation for that first kick drum to reverberate through my chest, for the manipulation of air particles into sound to affect me emotionally in ways I’ve come to recognize have a spiritual and narcotic effect. It’s hard for me to live without. My family and I make music at home. But it’s something else entirely to have someone else take you on that journey. I knew I would miss that feeling. I had no idea how much I would miss that feeling.

And no, streamed concerts are not the answer. I didn’t care for them before, and I don’t now. But they’re what we have right now. It’s the only way we get to see old friends and heroes in real time. So here we are.

I came of age artistically in Guelph in the 1990s. I moved there for university, played in a few bands, got a job, stuck around. For a while there I thought I might never leave. The friends I made there remain some of my favourite people to this day; the music we made together still resonates deeply for me.

One of my favourite people of that time (and there are many) is Vicki Fraser, who blew into town from Ottawa's jam band scene. She was a great singer-songwriter with a huge R&B voice she applied to folk music both on her own and with MVP Tannis Slimmon in the duo Crow's Feet. She often guested with my band, Black Cabbage, and after I played on her debut album, 1999's Dynamite Opening, I played accordion and keyboards behind her that summer.

Vicki is an exceptionally generous person, and now works as a therapist. Which is why I’m excited that after watching her friends' gigs dry up, she is assembling three Zoom concerts of old friends, based on the three cities Vicki has inhabited in her life: Toronto, Ottawa, and Guelph. A $20 ticket (+ $2.30 fee) delivers an hour-long variety show with five different artists—not unlike a folk festival workshop stage—with all proceeds going directly to the performers. You’re not going to see any of these people play your local pub or folk festival any time soon, and they’re not going to be making any gig money anywhere anytime soon. So: win-win.

The FB page for these things is here.

Dave Withers used to play with me in Black Cabbage. He was older than the rest of us pups back then. (He’s still older than us.) He wrote the rock anthems that got us on the radio. These days he does not write the rock anthems. Nor does he write rock bios, including his own, so I whipped this off for the old geezer: “For the last nine decades, Dave Withers has been an enigmatic part of southwestern Ontario's music scene. From his early Victrola recordings of farmhand hollers, to his innovative combination of country music and poetry that inspired Leonard Cohen, to his punk rock days drowning in distortion pedals, to his rebirth as an environmental propagandist infiltrating the public education system—Dave Withers has been impossibly hard to pin down. He didn't properly get his due until the early 90s with Black Cabbage, who coaxed him out of retirement and shoved him into a van driving across Canada. They shoved him out somewhere outside Edmundston, N.B., in 1999. For the next decade he could be spotted playing the same sad-bastard song at every open stage in Guelph (the Replacements' "Here Comes a Regular"). More recently he's been paying his bills in a wedding band while slowly working with producer Scott Merritt on his epic rock opera about a shuttered tattoo parlour.” Some of that is true. Maybe most of it.

Jessy Bell Smith has been singing with the Skydiggers for years as a backing vocalist, but when she’s given a solo spotlight—as she was at a recent Massey Hall concert I witnessed—she absolutely brings the house down. One of the most spine-tingling vocalists I’ve ever heard in my life—never mind had the immense pleasure of working with—Jessy brings total class to everything she does. She played my Guelph book launch a couple of years ago, delivering incredibly emotional takes on Gord Downie and Tragically Hip songs.

Jeff Bird and Sue Smith have been leading lights of Guelph music for 40 years. Jeff is known primarily for his role with the Cowboy Junkies ever since The Trinity Session, but was in Canadian folk legends Tamarack before that, and has made all manner of music since, including a breathtaking tribute to Hildegard von Bingen performed on harmonica and harmonium. Sue was one-third of the Bird Sisters and co-founded the Hillside Festival, and has been an inspiring teacher for generations of Guelphites—including me.

Nathan Lawr was just out of high school when he joined King Cobb Steelie as touring drummer in 1997. Two years later he joined Aaron Riches’ Royal City, whose first two albums helped kick off an indie rock explosion in Canada in the early 2000s. He’s played with Feist, the Constantines, and many more, as well as releasing a series of fine solo records. These days he leads the Afrobeat-inspired psychedelia of Minotaurs, whose brand new record is a real gem. As is he.

Nicolette Hoang is a next-generation Guelphite with one hell of a killer country voice, which she puts to use in Nicolette and the Nobodies, who released their debut in early 2019. I’ve yet to see her live, which is clearly my loss.

Tickets for the Guelph show are available here:
https://myevent.com/supporttheartscabaretseriesguelph

On to Ottawa. That one takes place Sunday, June 28 at 3pm, with these fine folks on board:

Kinnie Starr is a Vancouver-based artist, who first turned heads in the late 90s by mixing powerful lyrics, grungy guitars, hip-hop beats, and anything else she could find into an intriguing, unique blend. I didn’t know anything about her Ottawa connection until Vicki told me that Kinnie spent part of her teen years there, which is when they connected. Starr has had a particularly rough time in recent years, so it’s a real pleasure to see her back on the scene and performing.

Rebecca Campbell is an MVP in Ontario’s music scene, from her days as a backup singer for Jane Siberry to leading her own band, Fat Man Waving, to performing with electronic project Microbunny with King Cobb Steelie’s Al Okada.

John and Michelle Law are songwriters who run the Kingsville Folk Festival, near Point Pelée. Many moons ago John played in Ottawa band Four Way Street, and now he and Michelle are acclaimed songwriters with Nashville connections and at least one pundit declared them “the best duo out of Canada since Ian & Sylvia.” So there’s that.

Mark Robertson is perhaps best known for his role in Bullfrog, the Montreal funk band that featured world-renowned DJ Kid Koala. Robertson himself also played with Beastie Boy Money Mark, and has opened solo for Maceo Parker, the Wailers, and dozens more. His new album of soulful acoustic songs is called Made Easy for Guitar.

Dave Muir is now a stage tech at the NAC, but his days in Ottawa past include time with Longbottom, the Fabulous Primates and the Ultramundanes.

Tickets for the Ottawa event can be found here:
https://myevent.com/supporttheartscabaretseriesottawa

Go get tickets, people! Especially people I know personally from Guelph days and beyond, and if you happen to have mutual friends with any of the above people.

And check out the great work that SideDoorAccess.com is doing as well. You’re bound to find some chums there. My friend Veda Hille—who’s a fellow Scrappy Bitch with Oh Susanna and Kinnie Starr—is doing one on Sunday, May 24 at 3pm Eastern, and Charles Spearin (Broken Social Scene, Do Make Say Think, Happiness Project) is doing one on May 27 at 11pm Eastern.

I don’t love the idea of live streaming as a substitute for the live experience, but I’m certainly going to make some exceptions.