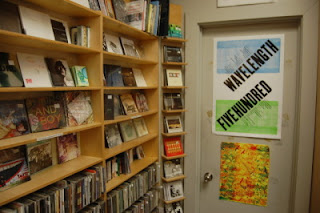 I’ve been inside dozens, possibly hundreds, of record stores in my life. Soundscapes is the only one where I’ve wanted to own every single thing on their shelves.


The staple of College Street in Toronto for the last 22 years announced this Easter weekend that they’re closing their doors. Greg Davis opened Soundscapes in 1999—the dawn of file-sharing. Music soon became irreparably devalued, a process that only continued to accelerate. But Soundscapes was where the true believers rallied. It was a destination. When I didn’t live in Toronto, every visit to town had to include a trip to Soundscapes. Every gig I saw at Ted’s Wrecking Yard was usually preceded by a trip across the street to Soundscapes. I still remember the first CD I bought there: the Weakerthans’ Left and Leaving, right before my own band’s gig at Ted’s. Soundscapes was open late, a late-night record shop, to which one might drive downtown in the rain. Am I right, Steven Page?


The curation at Soundscapes was impeccable. Unusually, it was all-new: this record store did not have a used section. You can find a lot of what you’re looking for and more at Sonic Boom, but that store’s Amoeba-style warehouse approach can be overwhelming. Not that I’m complaining, it’s just not always what I want. Rotate This was and still is a vital hub, but that store’s reputation always depended on being the hippest place in town—invaluable, but a vibe of its own. You want International Anthem vinyl or the new Kikagaku Moyo on import? Go to Rotate. You want Exclaim’s and Mojo’s current picks on CD? Go to Soundscapes.


Soundscapes was small, brightly lit, welcoming. Attention to detail marked not just the new releases but the reissues and classic records that should always be in stock. If you were a 60-year-old who’s heard it all, there was always some new collection of R&B Beatles covers, and clipped-out record reviews next to the listening stations to help you with new artists. If you were an 18-year-old who just discovered Irma Thomas and Aphex Twin, those records were always there, too, and easy to find. If you were a local musician, you’d find all your peers in the stacks at the back—and often at the front. Soundscapes was a place where music felt alive, where every shelf felt like a history lesson—about either the last seven months or the last 70 years. The store played an invaluable role in Toronto's exploding music scene at the time: Three Gut Records, Broken Social Scene, Feist (who lived upstairs when she was writing "Let It Die"), Great Lake Swimmers, Fembots, Blocks Recording Club, and others.


The staff were super helpful, especially last man standing "Flipped Out" Phil Liberbaum. Some of them were sorta famous. Steve Lambke of the Constantines was a frequent sight behind the counter, even at the height of his band’s success. John Crossingham of Broken Social Scene was guaranteed to talk your ear off on a slow afternoon (he's probably writing a 10,000-word store obit right now UPDATE: here it is, it's beautiful, please read it). Colin Medley, who’s now one of this country’s finest video directors for the likes of U.S. Girls, worked there for years. Folk singer Isla Craig, of Bruce Peninsula and other projects, worked there. Ubiquitous drummer Jay Anderson, ubiquitous jazzbo Mike Smith. I'm told Derrick Vella of local death metal heroes Tomb Mold was there also. Julie Fowler, Craig Dunsmuir, Iris Fraser, so many others. My friend Sylvie Smith of the Magic (no, not that one) not only worked the counter but designed many of the gorgeous window displays promoting local artists’ new records. At one point I knew enough people who worked there that I was invited to the store’s Christmas party (the playlist was amazing, of course). Although, you know what? I'm now old enough that I'm not entirely sure that even happened. But dreaming of a Soundscapes Christmas party is not out of character for anyone who spent a lot of time (and money) there.


I’m also not sure I ever went to an in-store, but looking at the list of people who played, I have no idea why not. I did, however, host my own in-store: Greg graciously allowed me to host an event for the revised edition of Have Not Been the Same, where Shadowy Men’s Don Pyle, Julie Doiron, and Alison Outhit had a lovely panel discussion. If the store were still to be open when I finish my current book, about the early 2000s, Greg himself would be on a panel, because he’s almost as essential to the story as the musicians I’m talking to.


We’ve all heard about how bookstores and record stores are cultural hubs, where clerks can help change lives, yadda yadda. That was all true of Soundscapes as well, but it really did feel like a community where you ran into friends in the aisles, or you randomly found yourself chatting to someone in one of Canada’s biggest bands. When writing The Never-Ending Present a few years ago (its third anniversary is this week), I learned that when Gord Downie played his first-ever solo gig, months before the release of Coke Machine Glow (20 years ago this spring), he insisted the tickets be available exclusively at Soundscapes. Diehard Hip fans from across the GTA had to high-tail it to the tiny Little Italy shop to see what weird adventure their hero was up to next.


Soundscapes wasn’t just a place to find music, it was a place to read about music. The magazines were the best (Wax Poetics, The Wire) and cheapest in town. I was told that Greg barely marked them up because he considered them a loss leader: the more people read about music, he figured, the more they were likely to come back and buy it from him. Soundscapes was the first record store I’d ever been to that had an extensive book selection (this was before Sonic Boom’s Spadina location). Looking for that exhaustive new Can bio? It’s at Soundscapes. My recent trips were usually to buy books and magazines—and still the occasional CD, as recently as a few months ago. When Have Not Been the Same first came out in 2001, our publisher had never heard of Soundscapes; I insisted that they reach out to Greg to stock it, which of course he did. I didn't really care where else the book was stocked: Indigo? Of course, whatever. As long as it was at Soundscapes.

I'd guess that most of the store's visitors in the last 10 years were there primarily to buy tickets without exorbitant Ticketmaster fees—the loss of live music last year likely hurt the store almost as much as plummeting CD sales. I’m pretty sure that one day the taxman is going to ask this freelance writer why, for years, the majority of my business expenses consisted of Soundscapes receipts.

This closure hurts—a lot. (As much as all the other horrible shit happening right now? Suicides, evictions, loss of livelihoods, mass malfeasance? No, of course not. But grant me a minute of myopia here before we return to our general grief.) It’s not that I should be surprised that a store selling physical copies of music is endangered, Covid or no Covid. I’m also not surprised that an inept provincial government—one that claims to be business-friendly—managed to blunder its pandemic response in ways that irreparably harm every business but the box stores. This closure hurts even more because it’s likely a domino, the first before a cascade of closures render my corner of the world unrecognizable. One down, two to go: Soundscapes is one of three downtown record stores that, until now, have been essential components of music fandom in Toronto. I hope that will continue to be true for future generations. I’m not counting on it.


Thank you, Greg Davis, for creating a space that felt like home to many. Thank you, Soundscapes staff through the years, for your warmth and gab and helpful pointers. And thank you, Rotate This (my local) and Sonic Boom and all the smaller shops—hang in there. We love you all.

Raise a glass for the late-night record shop.

And be sure to read John Crossingham's thoroughly excellent appreciation of Greg Davis as a person, and how and why his curiosity set his shop apart. It's here.

Posted by mmmbarclay at 11:21 PM No comments: