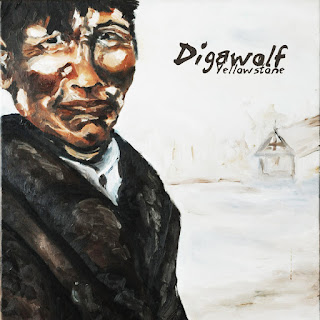 “It’s cold, but I don’t care / because there’s something in the air.” There sure is. The man who calls himself Digawolf hails from the top tip of Great Slave Lake, 80 km northwest of Yellowknife, from the community of Behchoko, the capital of the Tlicho Nation. It’s not a big place, and Digawolf’s creativity can be found everywhere—because he helped design the street signs.

Recorded in an oceanside barn in Denmark, with Greenlandic producer Jan de Vroede, “Yellowstone” sounds massive: this is not a lo-fi production from an artist in a remote community. The drums are crisp and thunderous, the guitars are fuzzed-out and thick, and other sonic layers provide gorgeous colours. Digawolf himself has a gravelly voice that sounds like it could only come from the Canadian Shield, which suits his thoroughly modern and often atmospheric take on the blues, not entirely unlike Tom Wilson’s Lee Harvey Osmond. On opening track “By the Water” he hews a bit too close to July Talk’s Pete Dreimanis; it’s almost a bit too imitative—doubly so, because Dreimanis himself draws heavily from Tom Waits—and will no doubt cause confusion when played on the radio (which it should be). The other obvious influence is Daniel Lanois; when he’s not digging into a heavy riff, Digawolf is a textural player, separating him from any straight-up traditional takes on folk or blues.

On top of the musicianship, the production, and the (unfortunate) novelty of such a fully formed Northern artist, the songs here are all fantastic, whether they’re folk songs like “Northern Love Affair” or droning, dubby blues like “The Undiscovered World.”

Though he hails from the middle of nowhere, Digawolf has made major inroads in the industry, with wins or nominations from the Junos, Canadian Folk Music Awards, Western Canadian Music Awards, and the Canadian Aboriginal Music Awards. This is the album that should connect him with a much, much bigger audience.

Posted by mmmbarclay at 9:43 AM No comments:

Email ThisBlogThis!Share to TwitterShare to FacebookShare to Pinterest
Labels: Digawolf

Christine Fellows – Roses on the Vine