More spring cleaning from the vaults of the last three months. 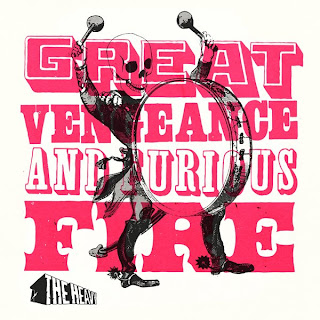 For all their obsessions with American soul and rock music, the British rarely do either right these days. Here, however, is The Heavy—a band from a tiny town outside of Bath who make dirty, raw garage rock and R&B that sounds like Curtis Mayfield fronting the Stooges. Lead singer Swaby bounces between swaggering bravado and a tender falsetto—he sounds like he’s well steeped in the Temptations’ psychedelic period. While none of this would work without his cocky charisma, it’s the devilishly distorted fat bottom grooves that drive this record, even when the tempo slows down to a torchy crawl. None of this is particularly original—especially the one track that lifts directly from the Spencer Davis Group—sitting somewhere between the retro revival of Sharon Jones and the futurist soul of Gnarls Barkley. Yet The Heavy are cheeky enough to pull it off, to get you reaching for the volume knob, and they give us one more reason to forget about Lenny Kravitz entirely—as if we needed one. (K-W Record, March 20)

A man can only wield a ukulele so long before he runs back to the electric guitar. Anyone who thought Stephin Merritt was lost to NPR and Chinese operettas after signing to Nonesuch will delight in the sound of the literally titled Distortion, which sounds like Merritt got caught up in the excitement of the recent Jesus and Mary Chain reunion. On the surface, the sonic atmosphere is the only thematic thread here—unusual for the mind of Merritt, who never sets pen to paper without a concept in mind. Most of the songs are about loathing—of both the self (“Too Drunk to Dream”) and others (the anti-OC anthem “California Girls”). It’s the running order that reveals a loose narrative. Merritt spends most of the first two thirds of Distortion repelling all those around him (“Mr. Mistletoe,” “Please Stop Dancing” before a wave of regret hits (“I’ll Dream Alone”) and he spends the final three songs equally fascinated and frustrated with the emotional detachment of others. Naturally, he uses the most extreme examples possible: a nun fantasizing of being a sex worker, a zombie’s lover, and a musing on the carefree life of a courtesan. Longtime fans will welcome back the vocal presence of singer Shirley Simms, a star of 69 Love Songs who was shut out of 2004’s i. Whether Merritt’s return to lo-fi will fly at the Lincoln Center remains to be seen, but his melodic mastery is never in question. (Magnet, Winter 2008) 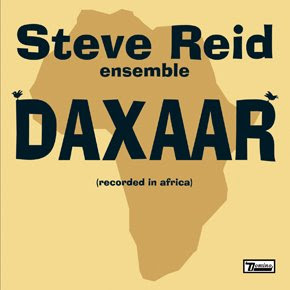 Riding a wave of renewed interest thanks to the Hebden projects and some reissues of his free jazz material, Reid recorded this album as an ensemble leader with local musicians in Dakar, Senegal. Sadly, the African influence is largely transparent. Real sparks are few and far between, and it's more than a bit disappointing that the laid-back locals never really rise to Reid's rhythms.

Neither, for that matter, does Hebden. Other than ably serving as the session producer, Hebden adds very little to the music when he gets his hands in there. The electronic sounds on the terribly titled "Jiggy Jiggy," in particular, sound like the band is being attacked by seagulls; elsewhere, he's more subtle but equally ineffective.

As a musician, perhaps Reid is more effective at taking orders than giving them; he deserves greater challenges than this. (K-W Record, February 7) 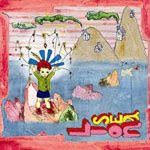 Singer/songwriter Ryan McPhun has lived by the ocean all his life: first in California, now in New Zealand. It certainly sounds like he’s spent a lot of time meditating in front of vast expanses of water; not only do many of his songs evoke a lush, warm and tropical ambiance, but you can actually hear the ocean in the background of several tracks here, with either actual birdsongs or instruments that are reverb-ed beyond recognition until they sound like aquatic fauna.

At one point McPhun does meditate on the "Morning Sun," and there are certainly moments where it sounds like Sigur Ros staging an operetta in a grotto where the piano is slipping into the sea. But this isn’t one of those soothing “sounds of nature” albums for your massage therapist.

The beauty of Sea Lion is its ability to create an entirely logical, self-contained environment where Phil Spector produces New Order on a remote African island. And despite the beautifully arranged vocals that owe more than a few obvious debts to Brian Wilson, the Ruby Suns are one of those rare bands that have learned from the more outré elements of the Beach Boys’ catalogue rather than aspiring to make a slavish imitation of the clichés that mark that group’s most popular songs.

The Western pop is only one element at work here. An acoustic Brazilian rhythm might be interrupted by an interlude of ukuleles and coconuts, which is then swept away by a loping brass section and Hawaiian guitar before giving way to African guitar lines and a choir singing in Maori. Sure, sometimes it sounds like a lo-fi Fruitopia commercial. More often than not, however, the adventures of McPhun and the Suns add up to a wildly rewarding ride that’s a wonderful left-field surprise. (K-W Record, March 27) 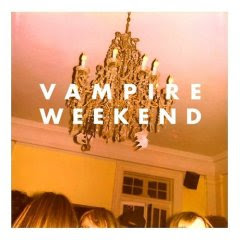 Here's a band that is often judged by their pedigree rather than their actual music, so let's get that out of the way first. Vampire Weekend are a band composed of New York City university students with song titles like "Cape Cod Kwassa Kwassa" and "Oxford Comma." Surely, goes the common critical argument, they must be smarty-pants upper crust cultural tourists who include ironic winks at African music in their heavily layered Big Apple bouillabaisse. “Feels so unnatural,” they sing, “Peter Gabriel too.” Whatever that means.

Yet Vampire Weekend’s debut is refreshing for its simplicity, for the way it feels entirely natural and joyous. It taps into the giddy, propulsive amateurism that has fuelled so much great pop music from the 50s to the great new wave songwriters of the 70s (David Byrne, Joe Jackson) to Toronto’s Hidden Cameras, not to mention the Third World mirror mutations of Western pop music that Vampire Weekend also borrow from, creating an odd cultural feedback loop that provides critics with endless cocktail conversation.

Because of their New York home and African interests, Vampire Weekend have been saddled with endless comparisons to Paul Simon’s Graceland, which is ridiculous for several reasons, starting with the fact that this is much more fun on a Saturday night. Furthermore, Simon hired the best of the best South African session players for that album, and a key part of Vampire Weekend’s unique charm is their ability to draw from that music without attempting to emulate it outright. This isn’t an album for ethnomusicology students, but if you’re trapped next to one at a party where this is playing, I’m sure they’d have some interesting theories.

None of this chatter matters during the course of these 11 songs, especially when arpeggiating cellos dance around the beat breakdown in Walcott, or the joyously strained group backing vocals affect a collective falsetto on Blake’s Got a New Face, or when secret weapon songwriter/producer/keyboardist Rostam Batmanglij pulls out his harpsichords and mellotrons. Drummer Christopher Tomson sounds like he’s fresh out of high school concert band and discovering skinny-tie new wave and calypso at the same time. There’s a martial stiffness to his playing, and yet his timing never falters and the grooves never get too slippery.

The stripped down arrangements are key here; the recording sounds raw and live and doesn’t rely on dense layers—a rarity from bands of any level or genre these days. As a band, Vampire Weekend do all their work in the rehearsal hall, not the studio. This is a band that thinks horizontally, not vertically: sparse, clean guitar leads are unsullied by any accompanying arsenal of rhythm guitars, and every song’s dynamics are driven by simple stops and shifts in the arrangements.

Explaining this music doesn’t make it sound any better than it already does, for Vampire Weekend succeeds primarily with uncomplicated songs and melodies that would work almost as well if Jonathan Richman played them on acoustic guitar. And their timing couldn’t be better: this is ideal musical escapism for the dreariest days of February, though you’re likely to be listening this consistently for the next 12 months and beyond. (K-W Record, January 31) 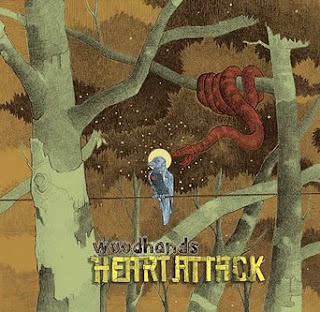 It’s been years now since the rock kids discovered how much fun it is to make live electronic dance music, and the benefits of that are now in full bloom. Witness the career resurrection of Daft Punk, the crossover success of their prodigies Justice, or the emergence of live bands like Toronto’s Holy Fuck and Waterloo’s own Bocce.

Woodhands are the latest to toss their hat into the ring, and they’re a bit too late. Here, they run a high risk of coming across as dabblers and not diehards. Paper-thin indie rock vocals don’t help matters, and there never seems to be enough of a bottom end to make any kind of dance floor impact—thankfully the drummer is decent enough to keep it interesting. When they try their hand at Junior Boys-style electro-balladry on "Straighten the Curtain," the adolescent lyrics prove to be far too distracting.

Only on the deliberately delirious track "Dancer"—with a faux-Busta Rymes freak-out chorus contrasting with lovely lady vocals in the verse and synths that threaten to spin out of control—do Woodhands deliver. (K-W Record, March 27) 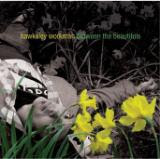 Hawksley Workman - Between the Beautifuls (Universal)

What a strange four years it's been for Hawksley Workman. After going for the gusto with 2003's Lover/Fighter -- where the flamboyant Toronto singer/songwriter softened his edges in a fair bid for U2-style arena pop -- Workman released a stripped-down piano album, recorded a reportedly dark and adventurous album that was then scrapped, and has finally surfaced with Between the Beautifuls. It's the sound of someone who craves less drama in his life, who's backing off from any grand statements -- musically or personally.

It's entirely possible that the greatest weight on this album is expectation. If this album was made by anyone else -- Ron Sexsmith, say -- it would be a collection of melodic songs nice enough for CBC daytime radio consumption, as delivered by an exceptional male vocalist.

From Workman, however, we've come to expect a bit more swagger, a bit more hunger and certainly more sexuality; if his early records sounded like an artist in love with the world and discovering that "singing is about sexual confidence,'' Between the Beautifuls is made by a guy who not only hasn't been naked next to anyone in a long time, but has lost any desire to.

Apparently Workman is selling his "missing" 2006 album at live shows; it would be fascinating to hear how it contrasts with this comparatively neutered album. "Someday we'll be bored,'' he sings here, "and we won't have time for these catastrophes anymore." It sounds like that day has come. (K-W Record, February 7)
Posted by mmmbarclay at 7:10 AM