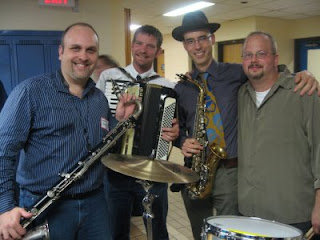 I was a high school polka star once. Last Saturday, I was again.

Most people start out their music career playing rock, punk, folk, or rapping in the cafeteria. I was highly susceptible to the power of the polka. My friend Paul Mora was forced into accordion lessons at an early age by his German-Swiss parents. Our drummer Greg Hodowansky had an accordion-wielding uncle who once led our Grade 3 class in Ukranian dance lessons. The taunt of the two-step was calling my name.

And so it was in the fall of 1987 that the three of us—along with Glen Johnstone on bass clarinet, and later Brendan Wall on tenor saxophone—started the Slobovian Army. [The term Slobovian was a sad attempt at the time to be a euphemistically “correct” alternative to the Polish jokes of the early 80s, as perpetrated by many morning rock radio DJs.]

Polkas were not only kitschy, funny and so phenomenally uncool, but they were also a perfect outlet for a teenage boy’s musical aggression—after all, they’re best enjoyed at breakneck speed, and feature pretty much the same rhythm as speed metal, shit-kickin’ country, or ska music. Inspired by the busking antics of the Shuffle Demons and a desire to take the piss out of pop music’s sacred cows of the day—George Michael, U2, Depeche Mode, etc.—we decided to bring polka to the people.

The concept started as a Christmas project, and eventually branched out into the aforementioned covers, as well as songs we genuinely liked (the Pogues’ “Fiesta,” the Beatles’ “Ob-la-di, Ob-la-da,” the Peter Gunn theme). We busked at Cedarbrae Mall for Christmas 1988, and raised the ire of many a shopkeeper who asked us to “turn down the saxophones.” We rented ourselves out as a “birthday service” at school, where for $5 (!) we would embarrass your friend by barging into their homeroom and serenading them with a polka “Happy Birthday” and the Beatles’ “Birthday.” We actually got invited to play other schools’ Talent Nights. We played our own Talent Night, and dared to play Billy Idol’s “Mony Mony,” which at the time prompted some rather profane crowd participation—we intended that to happen; we did not intend the teacher in charge of Talent Night to almost lose his job over the incident. (Again, sorry Mr. Jansen.)

Our music teacher, John Anderson, was our biggest fan. He loved the fact that we took music outside of his classroom (which was actually a portable) and got everyone else excited by it—and the more ridiculous, the better. He was a great man and a great teacher who knew exactly when to be a hard-ass, and when to gleefully encourage the expected teenage subversion.

Mr. Anderson’s sudden death this past September shook me more than I would ever have expected it to. It reminded me of how many life lessons I learned under his baton, and how music brought me out of my shell and the single biggest reason why I have so many fond memories of high school. I knew that I had wanted to get the Slobovian Army back together for this fall’s high school reunion; now we all knew we had to. I hadn’t seen Glen in ten years; I hadn’t seen Greg since high school. Paul insists that he hadn’t played accordion in four years; I refuse to believe him, as it all came back to him within seconds.

So last Saturday, we showed up at the school with our instruments and immediately set up and started to play—this time to classmates who were extra enthusiastic, thanks to the fact that the gym was licensed for the occasion. Were we any good? As we said to each other in rehearsal, “Well, we’re as good as we ever were.” Let’s just say that there wasn’t a lot of progression in the 20 years that have passed, although we do now have the confidence to drop a waltz into the middle of a medley, for whatever that’s worth.

What follows is my high school diary entries marking our first ever gigs: busking in the school foyer, and then appearing at a school assembly the next day. 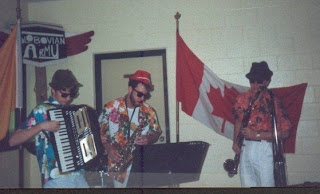 The Slobovian Army is progressing nicely. [Note: there is no mention of the band in the diary until this entry.] We had an excellent rehearsal today at lunch. We plan to perform on Wednesday. The big news is that Glen is really gung-ho about singing now. Today he was gyrating his hips while standing on the amp while singing. I haven’t laughed so hard in a while. This is a big change for him. When we first proposed the idea [of the band], with him on bass clarinet, he was wary of it. He would do it, he said, but claimed it would be really embarrassing and that we’d never live it down.

Then we tried to convince him to sing, after hearing him, and he ruled that right out. Then we asked Mr. Anderson to put pressure on him. Anderson told him that he had to sing, because he “had his name down in the program for the assembly.” After saying this, Anderson winked at me and I got the message.

Gradually, Glen got used to the idea and now I couldn’t envision him being more enthusiastic. Today he was spitting out ideas such as going around from class to class, renting ourselves out—a variation on Paul’s and my birthday idea, where for $5 we serenade your friend with “Happy Birthday” in their surprised homeroom. I really see this idea snowballing.

On Wednesday, the Slobovian Army performed. We started at around 8 and played until 8.25. It went all right, I thought. Glen didn’t sing, though. He chickened out. We didn’t get a big crowd because the buses were late and half the population arrived between 8.30 and 9. Barb said it was perfect, as the weather really sucked outside, and then she walked inside and saw these guys in loud outfits playing polkas. “It really lightened up a gloomy morning,” she said.

I wore my Hawaiian shirt with grey jeans, a Late Night shirt underneath, an Austrian red hat, and the essential shades. Paul wore a blue Hawaiian shirt with faded jeans, a cordoroy hat and shades. Glen had a not-too-offensive orange Hawaiian with a fedora and shades. Greg had a red shirt with white palm trees, a blue wool hat with beer labels saying ‘Oktoberfest’ all around it, and no shades. Derek thought we were going for “the Beach Boys image.” I was thinking more along the lines of the Shuffle Demons.

That afternoon after school, we had an encore performance. We played for around 45 minutes and garnered quite a crowd for a while, as we caught everyone leaving. I can honestly say the place was packed for a while. After about ½ hour, we had finished and Greg wanted to pack it up. But—never leave a crowd unsatisfied! We ran through a bunch of things. It was OK. Everyone got into “Peter Gunn,” etc. Brenda Campbell and company loved it. Mr. Anderson said the next day that we’d be amazed at the number of guys with sloping foreheads and dragging their feet that were saying (he mocks a stoned monotone), “Wow—this is cool stuff.” I honestly never would have guessed there was a market for polkas.

In the morning we raised $14. In the afternoon we raised $8 plus a bus ticket from Justin Lear and an unchewed piece of gum, plus numerous compliments throughout the week. Mr. Turner is a fan. Mrs. DiLeonardo thinks we should get a busking license and play in the subways. We managed to lure Mr. Donovan out of his hideout (his office) and Mary Joyce Empensando “thought you guys were good but I didn’t give you any money.”

Friday was an important day. I had to hand in a dissection and lab report in Biology, and a poetry assignment for English. The band was playing at the mass in the morning, and the Slobovian Army was having a command performance at the assembly in the afternoon. I stayed up until 12.30 Thursday night doing the former projects.

Friday morning. The mass starts at 9. The band is to be there at 8. I was planning on walking to the church (St. Thomas More) so I would have to leave around 7.15. This means I get up at 6.45. This I do. I step into the shower, and halfway through I feel like I’m going to throw up. I then get out of the shower and do exactly that. Seven minutes after I have breakfast, that decides to come up too.

I realize that I must go to school, yet I cannot walk. Mother graciously offers her driving services.

I feel extremely feeble throughout the mass, yet I was OK…

Back at school, I was under the impression that we’d have lots of time to rehearse, etc. Not the case. Everybody appearing, including a terrible rap group, wanted, needed and got a sound check. I was feeling very hungry so I had an apple, which I threw up fifteen minutes before the show began. I almost didn’t make it safely, as it came up halfway through my sprint to the bathroom. I managed to cover it and everything was safely flushed. I felt a lot better after that.

Our first set we played as everyone walked in and it included the Christmas stuff, plus “Heartbreak Hotel,” “Pigbag” (which the crowd got into, shouting “hey!”—even though we were very mediocre), “Peter Gunn,” “Stand By Me,” and that’s about it. It was OK. All this was while people were filing in, so I couldn’t tell—or care—if they were listening or not.

The middle set, when we were the center of attraction, was not so hot. Very sloppy. Fortunately, we only played around seven songs. Glen was going to sing and Paul and I were going to slow down [the tempo], but Greg was too far away from us and we weren’t able to signal him. Shame.

When we finished, I went up to the mic to make an announcement. I mentioned our cause, our total ($20), and thanked Mr. Anderson for his support. I kick myself now as I think of all the things I could have said.

“I’d like to introduce the members of the band. On the drums, Gregory ‘meet you backstage’ Hodowansky! On the bass clarinet and sometimes vocals, that sexy hunk of masculinity who is embarrassed sooooo easily, Glen Johnstone! And on the eternal squeezebox, my partner in crime, Mr. Paul ‘everyone loves a polka’ Mora! I’m Mike, and thanks again for your support and remember: disco died, rock still tries, but ladies and gentlemen, polkas never die!”

It would have been great! Would have, I suppose.
Posted by mmmbarclay at 8:13 PM

Awesome article dude! You hit the nail right on it's proverbial head. Long live the SLOBS!

Barclay, you should have read this on Diary of a Freak! Really great post.

I enjoyed it as much in 1987 as I did Saturday night. Thanks for adding so much fun over the years, and for continuing to do so... Best wishes guys, It was great to see you all.

Right on! For years I thought you were just making up the band - that it never existed. Guess I was wrong.