Martha and the Muffins live 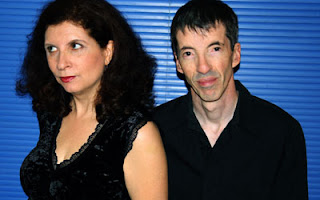 Far away in time, indeed. Today, Martha Johnson sings “Echo Beach” over an arrangement slower than its original tempo, devoid of drums or sax solos, and with the melancholy memories of a 50-year-old woman, reflecting on past regrets rather than racing to get out of a soul-numbing office job. The urgency of youth has obviously faded; today, escaping to Echo Beach seems more of a wistful fantasy rather than a compelling urge. There’s more resignation, less rage, and Johnson invests more emotion into her performance: rather than sounding like she’s enduring the song the same way she endures her office job, she takes time to sink her teeth into each line.

“Echo Beach” is a song that has defined Martha Johnson’s career with her husband and collaborator Mark Gane, although she hasn’t had to sing it in public for the better part of two decades now. Martha and the Muffins started at the Ontario College of Art over 30 years ago, and were responsible for some of the most exciting moments of Canadian pop music in the ’80s, starting with “Echo Beach” in 1980 through to their third collaboration with Daniel Lanois, 1984’s Mystery Walk, which yielded the equally big hit “Black Stations/White Stations” (which reached #2 on Billboard’s dance charts, falling behind only Prince’s “When Doves Cry”).

Their beginnings were unremarkable, save the enduring ennui of “Echo Beach.” Much of their material was decent, driving new wave pop with deadpan vocals and sax solos. It was when they met Lanois—through his sister Joceylne, who was their bassist—that the material started to get more adventurous, enamoured with similar synth and ethnomusicological experiments that Lanois’ collaborator Brian Eno had been working on with Talking Heads and Jon Hassell. It’s easy for Canadians to simply recall Martha and the Muffins as kitschy new wave relics, but listening to the breakdown in “Black Stations/White Stations,” the arpeggiated Frippotronic guitar in “Swimming” or the pure icy perfection of “Danseparc,” they were a lot more adventurous than many of their local peers (i.e. Spoons, Blue Peter), and their international respect only bolsters that.

And so now, 18 years after the last proper studio album from Martha Johnson and Mark Gane—not counting children’s music and film scores that have kept them busy while raising their now-17-year-old daughter—they return with Delicate, and a pair of intimate live shows at the Music Gallery in Toronto, with a stripped-down band and a curious audience—one where this 38-year-old critic was perhaps the youngest person in the room who wasn’t dragged there with his parents. (Eve Gane and her cousin were working the merch table.)

They take the stage with a trio on bass, guitar and keyboards, and launch into a version of “Black Stations White Stations” that’s far removed from the new wave Afropop of the original; driven by a chugging electric guitar and upright bass, this sounds like a Rick Rubin reinvention for a Johnny Cash album. And in case we were hoping for an evening of faithful renditions, Johnson sets the record straight by changing the line “this is 1984,” to “that was 1984.”

Older material (“Cooling the Medium,” “Swimming,” “Women Around the World At Work”) is interspersed with the new album, to mixed effect. The album itself is sadly unremarkable, but several new songs come to life in a live setting, including “Drive,” “Mess,” the unreleased “Delicate,” and a gorgeous, torchy version of Johnson’s midlife marital crisis ballad “Life’s Too Short to Long for Something Else” (for which Gane was conspicuously absent from the stage). Older material suffers from a lack of a drum kit—“Echo Beach” being an exception, having been transformed into a different mood entirely (the structure was also altered). “Danseparc” features Johnson picking up a midi saxophone for an all-too-brief interlude of inspired weirdness; the song also squeezes in “Paint By Number Heart” into its mid-section. And throughout the evening, Gane—who is an astounding guitarist—appears to keep himself on a short leash.

There was an awkward air to the entire evening—to be expected, considering their long absence from the stage, and perhaps some added nerves because the show was being taped for a possible live album. The band could definitely use some road-testing, and there is some unwelcome tension in the arrangements that suggests Gane and Johnson haven’t fully decided how to present a career’s worth of material.

The name Martha and the Muffins (or, for that matter, M+M) is as much of a boon as it is a bane for the couple at this point in time, and no one would ever suggest it’s easy to return to a creative life after 17 years of a domestic one. And if Delicate won’t be the album to reignite their worthy reputation, here’s hoping it clears out a few cobwebs and sets the stage for wherever they go next.
Posted by mmmbarclay at 3:42 PM

Email ThisBlogThis!Share to TwitterShare to FacebookShare to Pinterest
Labels: Martha and the Muffins

I was at the Friday show!