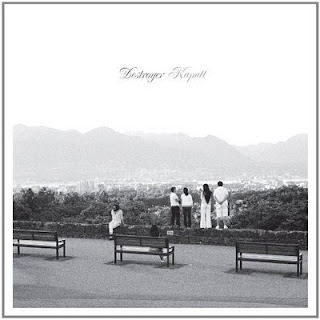 When looking for sources of musical rejuvenation, it’s rare for anyone to turn to Bryan Ferry solo records. That’s what Dan Bejar, bandleader of Destroyer and contributor the New Pornographers, does here. Kaputt is full of slinky, soft grooves, sax solos, flutes, fretless bass, pillowy synthesizers, and strong female backing vocals—none of which have ever appeared in the Destroyer discography before.

And yet stripped of his usual glam-rock guitars, psychedelic keyboards and ’90s indie slackerdom, Kaputt still sounds very much like Destroyer: an avalanche of elusive poetry framed by melodic instrumental breaks and Bejar battling himself, trying to figure out whether to write simple and catchy ba-da-ba hooks or simply spit out his lyrics as fast as he can.

Except that here he seems less in a hurry to get to the finish line; here, he lingers in every luxurious moment, like a wide-eyed baby staring in wonderment at every new revelation this new sonic landscape presents. It’s also downright sexy at times—and as any fan will know, that’s not a word that anyone has ever used to describe Destroyer.

Kaputt is nothing if not a middle-aged record; between this and 2008’s Trouble in Dreams, Bejar became a father—not an insignificant event for anyone, least of all an artist. This definitely sounds like dad rock, the sound of a man pushing 40, casting aside any final remnants of cool and reliving the musical obsessions of his youth (primarily New Order, along with Ferry and other identifiably ’80s staples), while chilling out with ambient records in the wee hours while he soothes his baby to sleep. Bejar no longer sings like everything is a life-or-death battle anymore; he opines, “Let’s face it, old souls like us are born to die/ it’s not a war until someone loses an eye.”

Bejar has rebelled against his indie-rock-idol status before, on 2004’s criminally underrated Your Blues, which at the time was considered a contrarian career-killer of sorts (an absurd notion for someone like Bejar, who has never had any intention of living up to anyone’s expectations except his own). It also featured fabulous songs, which no one seems to remember (except Owen Pallett, who was an outspoken fan).

But where Your Blues was consciously synthetic, full of faux instrumentation via MIDI patches and with only the occasional “real” instrument, Kaputt is bound to be more confounding: there is magnificent guitar work and the rhythm section is rock solid, but the overall aesthetic is pure cheese. Not in the traditional ’80s revivalist manner, either, where it’s all too easy to add a few retro synths and write songs that sounds like The Cure. Instead, Bejar dives in deep with some acoustic guitar worthy of Sting solo records, plenty of flute, and the sax solos alone will be enough to send many people screaming. The trumpet is another story; it’s textural and haunting, no doubt influenced by frequent Brian Eno collaborator Jon Hassell (their records together were probably part of Bejar's early morning baby-soothing soundtrack—at least they were for me).

When it comes to fromage, of course, there is cheese and then there is fine cheese. And while others from Bejar’s oeuvre might approach this material with irony or mockery—recall the thankfully short-lived “yacht rock” fad a few years back—Bejar sounds dead serious about it. Which he is; this record wouldn’t sound as objectively fantastic from a fidelity standpoint if he wasn’t. (This is the first Destroyer album that deserves to be heard on fine headphones.) His seriousness shines throughout Kaputt, and at one point he even seems to direct a barb at potential fan reaction: “I sent a message in a bottle to the press, saying ‘don’t be ashamed or disgusted with yourselves.’ ” There are no guilty pleasures—only pleasure.

Kaputt is a divisive record, as every Destroyer album should be, but it’s also a joy to listen to, whereas other recent Destroyer albums can sometimes sound like they’re too much effort to even try and enjoy. As all good middle-aged-man music is apt to do, Kaputt does the work for you: Bejar takes a back seat and doesn’t shove his vocals in your face; the arrangements are structured, but the instrumental interplay is all over the place, allowing you to choose what you focus in on at any given time. It’s only easy listening if you let it be; if not, there’s plenty to discover in various well-illuminated corners of the mix.

Recently, Dan Bejar was starting to sound bored with himself. In fact, last year he openly questioned the reasons he bothers making music at all, on an ambient spoken-word piece (“The Making of Grief Point”) he made with Loscil (Scott Morgan, onetime Destroyer keyboardist). In that context, the only joke about Kaputt is its title—the word, of course, means broken or destroyed. And either Bejar has destroyed Destroyer and delivered this strange but wonderful epitaph, or he has scorched his previous comfort zone in order to start entirely anew.

Download: “Poor in Love,” “Savage Night at the Opera,” “Bay of Pigs”

Posted by mmmbarclay at 3:33 PM