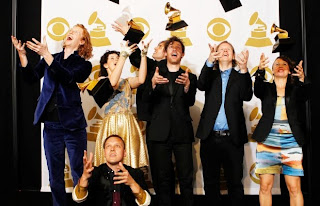 What Sidney Crosby’s Olympic goal was to many, last night’s Arcade Fire win was to me.

The Olympics and the Grammys are two institutions I’ve never cared about. And of the two, the Olympics have a better track record of rewarding excellence.

So why do I care about Arcade Fire nabbing the Album of the Year award in an upset win?

Part of me doesn’t, really. It’s one more laughable WTF moment, the type that has been happening to the band ever since they ran out of copies of Funeral in the week of its release. Shortly after, they were being feted by their musical heroes and everybody wanted a piece of them. To their credit, they kept their feet on the ground, chose their collaborators carefully, and stayed true to who they were.

For whatever reason, this is the year Arcade Fire started saying yes. American Express wants to sponsor a live webcast of our Madison Square Gardens show? Sure, if it means we can get Terry Gilliam to do it. Google wants to help launch its new Chrome browser by collaborating on a mind-blowing video for “We Used to Wait”? Why not, if it means redefining what a music video can be. You mean the Grammys, the Junos and the Brit Awards all want us to play on television? Could be funny. And so with zero expectations other than to amuse themselves, everyone in the Arcade Fire camp headed to L.A., where they were up for three awards.

The Grammys are a notorious shitshow. The last time there was a Canadian upset, it was 1970, when David Clayton-Thomas and Blood, Sweat and Tears won Album of the Year over the Beatles’ Abbey Road and Johnny Cash’s At San Quentin. Legions of legendary musicians have never won a Grammy; last night Neil Young won his first one (for music, because a box set won a couple of years ago). Conversely, unworthy elder statesmen regularly get token nods for weak work; why else would Tom Petty be noticed for that wretched blues album he put out last year? Meanwhile, Grammy nights have been full of bizarre moments: Jethro Tull beating out Metallica for the first metal Grammy, Steely Dan winning Album of the Year—in 2001; various duets and unplugged albums taking home the big prize.

And so there was Arcade Fire, up against Lady Gaga (fascinating commercial superstar), Eminem (redemption/comeback story, second only to Gaga in terms of sales), Lady Antebellum (zzzzzzzz), and Katy Perry (entirely inexplicable in this category). What do all these acts have in common? They’re all part of the ancient starmaking system, nurtured along by industry veterans, massively successful on radio. Arcade Fire became popular before they even had a manager, they own their own music, which they lease to an independent label, they get nominal radio play at best, and are never seen in celebrity magazines—which might be why both Rosie O’Donnell and Dog the Bounty Hunter tweeted “never heard of ’em” after the win.

But you know all that.

Arcade Fire’s Grammy win means everything and nothing. It could be a triumphant victory for the underdog, one who dared to close the ceremonies by singing about an emperor with no clothes and “businessmen [who] drink my blood.” Or it could be just another weird blip in the rise of Arcade Fire, one that will be quickly forgotten by the celebrity culture the band disdains.

More than anything, it’s a laugh—as you can see in the band’s faces when Barbra Streisand stuttered over the name of their album, and as you can see in their press conference afterwards (both clips are available here; the press conference is priceless, and shows what the band is really like behind their all-too-serious public profile). “This is from outer space” said Win, when asked about the prize. “We will joke a lot about it. We’re just getting warmed up. I think the jokes we can make about this are endless.”

But for me, like Crosby’s goal, this was an exhilarating adrenalin boost and point of pride, even if it’s an ultimately meaningless, ephemeral and random moment that merely affirms something we knew already. Even though this band had nothing to prove to anyone—the album and the live show have already done that in the past six months—this small victory felt so right only because it was in the belly of the beast of all that is so wrong about the music industry.

“How will you be celebrating tonight?” asked one reporter. “You’re looking at it,” laughed Richie, surveying a room full of people who have to explain to their bewildered readers and viewers who Arcade FIre are. “Questions. Celebrating with a lot of questions.”

Crown myself the prince of buzz
Can't wait until you, can't wait 'til you unsubscribe
I'll be a lonely scribe

But: what if they like it?
And lock us in a cannery with your accordion
Until we canned our love?

Posted by mmmbarclay at 7:31 PM

Arcade Fire deserved this to the max!
They are true artists, while the others are mainly out to make a profit.Their lyrics are actually meaningful. Get a clue Everyone and widen your horizons