Have Not Been the Same: The birth of the book 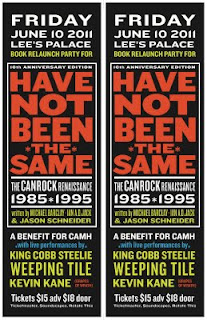 Chapter two: The birth of the book

I was 13 in 1985; 23 in 1995. My co-author Jason Schneider is the same age; Ian Jack is a couple of years younger. Obviously the music in this book is the music of our youth, and as such it has a mythic mystery about it that resonates with us in ways that very little else has had since. All three of us seek out all sorts of new music and love it deeply, but in many ways the artists in this book are the ones that define us.

From 1993 to 1999, I was the music editor (among other things) at Id Magazine, an alt-weekly out of Guelph, Ontario, that also served Kitchener-Waterloo, Hamilton, London, St. Catharines and Windsor—basically all the university towns west of Toronto. Jason and Ian were both music writers; Jason also covered news, literature and just about anything else. We had each thought of writing a book about Canadian music individually; I proposed we do it together.

Each of us had artists that specifically inspired us to do this. We each loved one of the big mainstream bands of the period: for Jason, it was The Tragically Hip, for Ian it was Sloan, for me it was Blue Rodeo. And we each had an underdog band that we felt never got proper due from mainstream Canada: for Jason it was Change of Heart, for Ian it was Men Without Hats (who did have a huge single, admittedly), for me it was the Rheostatics.

We had a lot of support from friends, peers and our subject matter, but we also met with some quizzical looks. “Are you sure you have enough material to fill a book?” asked one older music writer, whose name honestly escapes me now. (The end result was over 700 pages long.) “What’s so good about the ’80s?” I was asked by Hugh Marsh, the brilliant violinist extraordinaire for Mary Margaret O’Hara and Bruce Cockburn (though if you’ve heard his overproduced solo albums from that period, you might wonder the same question). CFNY DJ Dave Bookman declined an interview, telling me that he felt it was too soon to reflect on the period (“No one has died yet”). Bob Wiseman thought that our thesis had something to do with proving that Blue Rodeo was a punk rock band, and refused to be interviewed (10 years later, I finally convinced him otherwise and got an interview for the new edition).

Part of the inspiration for writing the book was realizing that no one else would. There is no glory to being a music writer in Canada: you could probably count the ones over 40 on one hand. As Gord Downie mused to us, most music writers “catch the first plane to Cannes as soon as they can”—referring to the legions who turn their back on rock’n’roll to become film critics (who always seem to get more space in newspapers and magazines than music writers). After Id Magazine went under in 1999, the three of us didn’t have full-time gigs, we didn’t have families, and we had no plans to morph into film critics. We had lots of time to dive deep into this project.

Until then, all Canadian music books were about boomer heroes or punk rockers. Canadian music history seemed to have ended in 1980 (this is still largely true). The Canadian publishing market being what it was and is, would there ever be a book written just about The Tragically Hip? About Sloan? As it turns out, no, not even 10 years later. Certainly, no one would ever write a book about only Eric’s Trip or the Nils or Mary Margaret O’Hara or Art Bergmann—though you could.

Dave Bidini wrote eloquently about his own experiences in the Rheostatics on several occasions, notably in 1998’s On a Cold Road. There was later a book about the Barenaked Ladies. There was a good book about k.d. lang, written by an American, but we wanted to focus on her country career. Daniel Lanois and Joey “Shithead” Keithley wrote autobiographies. There was a book about Sarah McLachlan that was one of the worst music books any of us had ever read in our lives. Nettwerk Records published a book about itself that only its staff could love. As far as we could tell, no one was going to connect all those threads together, along with lesser-known artists that we considered just as important.

People often ask us what it’s like writing a book with two other people. It’s a lot like being in a band: you play drums, you play guitar, I’ll play bass and we’ll write songs together. Writing a book, you all agree on the outline, you’re each assigned certain chapters, and 90% of the time you’re working on your own. You then edit each others’ work, share resources, offer suggestions and try to agree on a style guide.

The most contentious part of the book was the outline: deciding what acts were in, which ones were out, which got only a cursory mention. We knew we weren’t going to write an encyclopaedia. We wanted to tell a story. Our goal was not to mention every single act of the era, and in fact there are many artists we like that are mentioned nowhere in the book, because they didn’t fit into the thematic framework we settled on. When deciding on the artists, it was important to us that they had a national impact: that they either toured the country or were visible on MuchMusic and elsewhere in the media. Few, if any, regional artists are given ample space in the book. (I can only think of two, and yes, they’re both Torontonian: A Neon Rome and Handsome Ned, and they both have fantastic stories.)

Too many Canadian projects, historical or otherwise, go to great pains to include “everyone”—and too many of them suffer because of it. We knew we were focusing primarily on English Canadian rock’n’roll. Quebec’s distinct society and entirely separate star system were beyond our understanding (and, we assumed, that of our audience). Canadian hip-hop was too nascent during that time frame; its real impact didn’t really kick in until much later. There is a great book to be written about Canadian hip-hop, one that will no doubt touch on some of the same cultural and industry themes in our book, and I pray that it will be written soon (someone whose writing I greatly respect promises me it will be). We were primarily rock kids: our impressions of folk music, reggae, jazz, avant-garde music and other genres were filtered through rock’n’roll conduits.

Somehow we managed to convince a publisher, ECW Press, to commit to the project in December 1999. When I got the news, I had taken a temp job at Columbia House, of all places, the discount mail-order music club that was dying a slow death. (I was writing copy like: “The Best of Meat Loaf: Big man! Big hits!”). Ian took a year off after finishing teachers college to devote to the project. Jason and I juggled freelance work. The three of us spent the next 18 months working full-time researching and writing the book, with the help of two extremely patient and helpful and enthusiastic editors, Michael Holmes and Jennifer Hale. Though their eyebrows raised higher and higher when they saw the word count rising, they remained committed to the project and let us have free reign, for which we are eternally grateful.

Not that there wasn’t room for improvement—which is in part why there’s a 10th anniversary edition. More on that later.

Posted by mmmbarclay at 5:04 PM

Email ThisBlogThis!Share to TwitterShare to FacebookShare to Pinterest
Labels: Have Not Been the Same