Have Not Been the Same: King Cobb Steelie 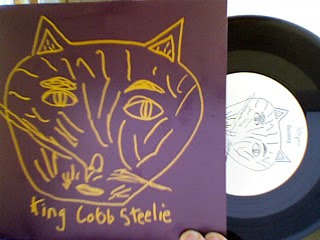 Few bands of the CanRock Renaissance could claim to be equally—and successfully—influenced by Fugazi, NoMeansNo, dub reggae, the early waves of what would later be called electronica, free jazz, ambient techno and pop music. In fact, I can only think of one: King Cobb Steelie.

That this band was ever signed to a Canadian major label (EMI) is incredible, even considering the throw-everything-against-the-wall approach the industry took to finding the next big thing in the ’90s. They represented the antithesis of everything Canadian rock radio was looking for in alternative acts: “precious to you, an aberration to me.” Their roots were in the idealisms of community radio and in activist politics, their list of influences was comparatively obscure, and their list of collaborators were contrarian outsiders: Steve Albini, Bill Laswell, Guy Fixsen (Laika, My Bloody Valentine), Shadowy Men on a Shadowy Planet, Change of Heart.

Despite all of this and occasionally self-righteous lyrics, they didn’t take themselves too seriously: like Shadowy Men, their song titles were full of clever puns and absurdist wit, and oddball samples were peppered throughout the first album (“Perhaps a frontal lobotomy would be in order!”). KCS started out playing half-hour sets and giving away their debut seven-inch for free: the latter act seems quaint now that every band under the sun gives away at least a free MP3 as an album teaser, but at the time it seemed a revolutionary act condemning the commodification of art.

The self-titled 1992 debut is filled with fiery purpose, all jagged edges, turntable stabs and rumbling bass lines that showed Kevin Lynn to be the most exciting bassist in Canada whose name wasn’t Rob Wright. (I’d argue he still holds that title.) As Kevan Byrne counts down the beginning of opening track “Duotang,” he sounds exhilarated and somewhat uncertain what he’s about to dive into—punk, funk, dub, abstract ambient and, uh, grunge—but ready to embrace the adventure. Listening to it today, some of it is very much of the early ’90s (“Is that teen spirit I smell or just wishful thinking?”), but a lot of it remains powerful and in many ways more gripping than either its obvious influence—the post-punk dance party of Gang of Four—or the young New York whippersnappers who rediscovered Gang of Four in the early 2000s (looking at you, The Rapture).

Its follow-up, and their major-label debut, was 1994’s Project Twinkle—an album the band admits was a rush job to accommodate Bill Laswell’s busy production schedule (recall, if you will, that the Material/Herbie Hancock/Public Image producer released about an album every month during the mid-’90s, mostly meandering ambient dub records with Parliament/Funkadelic alumni). What was to be the band’s big coming out party was instead their weakest album, though instrumental tracks “Italian Ufology Today” and “Technique”—the least “commercial” tracks on the album—easily hold up with the best work of the band’s contemporaries. The album came out on Lunamoth, a short-lived vanity label with EMI funding that put out records by Hayden, the Wooden Stars (featuring Michael Feuerstack of Snailhouse) and Ui (a band led by Sasha Frere-Jones, now music critic for the New Yorker).

By the time of 1997’s Junior Relaxer, the band had truly hit their stride, with the help of new drummer Sam Cino, programmer Don Pyle, guest vocalist Kinnie Starr and producer Guy Fixsen. They somehow spun a single out of a song commemorating slain Nigerian activist Ken Saro-Wiwa (“Rational,” which was a MuchMusic hit), but again it was the instrumentals (“Quo Vadis,” “Swiss Crumb”) that made the most impact.

Though King Cobb Steelie shared artistic allegiance with all sorts of international artists of the time—Cibo Matto, Massive Attack, Beastie Boys, Asian Dub Foundation—they were often left stranded on an island of their own. The associations with Albini, Laswell and Fixsen didn’t seem to get them any traction on the world stage, and most people in Canada didn’t know or care who those people were. (Albini being the exception, though their work with him was limited to two songs that appeared on a compilation.)

The 2000 album Mayday, recorded as the band was stripped down to the trio of Byrne, Lynn and percussionist Mike Armstrong, was more of a concerted pop effort, with fine results: “Home” and “The Stinger” still sound huge and current today. And yet it didn’t seem to win them any new fans, which is probably why 2004’s Destroy All Codes was an almost entirely instrumental excursion into digital funk, sounding like a 21st-century version of the Meters. Sadly, that album seemed to sink without a trace.

King Cobb Steelie’s career is full of what-ifs: what if they got the fuck out of Canada? What if instead of signing to EMI they made connections with international labels who would know what to do with them? What if the rest of the world actually cared about weirdo Canadian music then the way it does now? What if Canadian audiences weren’t so conservative and instead embraced an innovative band of the moment, rather than always being 10 years behind?

No matter: King Cobb Steelie were and are a great band, one that was simultaneously very much of the moment and yet out of step, out of time. Because of that, they helped show other Canadian artists that our choices involved more than being just yet another scrappy grunge band, yet another folk rocker or yet another corporate rock shill. That there were all sorts of worlds to tap into and still be a great rock band. That you can stay in your tight little community forever and preach to the choir, or you can roll the dice and engage with the world—both options are fraught with risk, but the latter is worth it if you open the mind of even a few unsuspecting listeners and set them on an entirely different course.

King Cobb Steelie were one of the bands of that era that changed the way I thought about music—both the creation of it and the marketing of it. But at the end of all the endless gum-flapping, the latter doesn’t really mean shit; it’s the music that still stands, and it stands tall. And that’s what we’re going to be celebrating at Lee’s Palace on Friday.

Email ThisBlogThis!Share to TwitterShare to FacebookShare to Pinterest
Labels: Have Not Been the Same, King Cobb Steelie