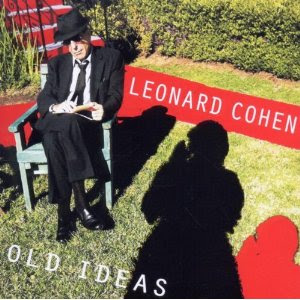 Old ideas indeed. Really, really old ideas. After all, the 77-year-old songwriter is an old man, who doesn’t write in tempos that exceed his heartrate, and whose voice has seemingly dropped yet another octave. And yet Leonard Cohen hasn’t sounded this vibrant in 20 years.

Old Ideas may refer to the fact that Cohen often takes years to complete a song. These songs sound even older than they are because, for the first time ever in Cohen’s career, he’s embraced the blues. (Blues music, that is—G-d knows he’s had the blues for a long, long time. But previously, you could count the number of Cohen blues songs on less than one hand.) Like Tom Waits, Bob Dylan, Van Morrison—geezers who are actually younger than Cohen—the godfather of gloom has found the simplicity of the form suits his lyrical mood of reflection, redemption, and atonement.

When he’s not falling into the blues, he’s penning songs that sound like hymns. Darkness and light, the earthy and the divine, the sacred and the profane—these dichotomies have always been Cohen’s preferred themes, but here they play themselves out musically as well as lyrically.

The most overt blues songs here are "Darkness" and "Banjo," both for their structure and the slight twang in the guitar, but four more of the 11 songs on Old Ideas adhere to loping blues rhythms, Cohen’s trademark spoken-sung cadence, and sparse instrumentation with plenty of spaces for ghosts to haunt.

That instrumentation is a key part of Old Ideas’ success. Members of his killer live band appear sparingly (except for one track, "Darkness," featuring the full band); much of the album was made in isolation by Cohen and co-producer Patrick Leonard, a mainstream pop producer best known for his work with Madonna. But acoustic guitars, violins, live drums and vintage keyboards all take precedence over the synths that Cohen has favoured for much of the last 30 years, for better and worse. “Crazy To Love You” is the first song in decades where Cohen has appeared without a band (or synths) and playing only acoustic guitar.

This is not, however, the sound of Cohen rejecting all progress to sound like an old man singing the blues with acoustic instruments. Old Ideas is very much a 2012 recording; the slick production oozes sensual textures out of every gentle tone, and all the vocals—Cohen’s as well as female vocalists Jennifer Warner, Sharon Robinson and the Webb Sisters—are luxurious and intimate in ways they’ve never been before on a Cohen album.

Of course, the music is really only about 30 per cent of the appeal of any Leonard Cohen album. Lyrically, he’s back on his game: he’s not going to return to the avalanche of imagery and insight that marked 1988’s I’m Your Man and 1992’s The Future, but he writes with much more conviction here than he did on either 2001’s Ten New Songs or 2004’s Dear Heather.

Old Ideas is very much the sound of a man taking stock of his life and his surroundings, seeking “healing of the spirit / healing of the limb.” Characteristically Cohen, sometimes he’s dark, sometimes he’s Biblical, and sometimes he’s more than able to laugh at himself—like he does on opening track “Going Home,” where the narrator expresses how “I love to talk to Leonard / he’s a sportsman and a shepherd / he’s a lazy bastard living in a suit.” Of this fictional Leonard, he sings, “He wants to write a love song / an anthem of forgiving / a manual for living with defeat”—which pretty much sums up Cohen’s entire career.

The most affecting song is “Anyhow,” a powerful plea to someone who was not just a lover—of which Cohen has had hundreds—but likely the mother of his children, or at least someone with whom he shared years of deep affection and acrimony, someone who knows all his faults intimately and has no valid reason to forgive him. And yet he persists, knowing full well he’ll never receive full absolution: “Have mercy on me baby / After all I did confess / Even though you have to hate me / Could you hate me less?” That track is followed by “Crazy to Love You,” a lyric co-written with his current flame, singer Anjani Thomas, where a former playboy settles down, somewhat unwillingly, and discovers peace of mind when he’s no longer chasing “souvenir heartache”: “I’m tired of choosing desire / been saved by a sweet fatigue.”

The sound of “sweet fatigue” was taken a bit too far on his last two albums, but here Cohen sounds alive and engaged, as playful as he was on stage in recent years. This is still not an album likely to be played during daylight hours—or even before 1 a.m. But it stands as Cohen’s most consistent set of songs in 24 years, one of his best-sounding albums ever, and a perfect capper to his recent comeback.

But as much as Old Ideas sounds like a Final Statement from Cohen’s tower of song, don’t start thinking that he’s done. Apparently he’s already halfway through his next album—and another tour is in the works.

You can read my lengthy timeline of Cohen's career at Exclaim this month.

Posted by mmmbarclay at 1:33 PM