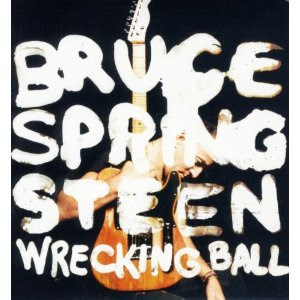 2012 demanded a big-moment, cultural watershed album from one of America’s working-class heroes. The U.S. is in the middle of not only an economic crisis, but an existential one—and it’s an election year partisans paint as a battle between good and evil. What better time for a Bruce Springsteen album? And not just any Springsteen album (the less said about 2009’s Working on a Dream, the better), but one where he’s firing on all cylinders, playing to the back seats, waving the tattered flag and standing up for the common man in one rousing anthem after another.

Ideally, said album will also be at least pretty good—and Wrecking Ball is, more often than not, pretty fantastic.

Springsteen has done this twice before in the last decade: once, on 2007’s knockout Magic, when he saw upstart young disciples like Arcade Fire stealing his mojo, and once in 2002 when he channelled the energy of the reunited E Street Band to help heal America in the wake of 9/11 on (the arguably less successful) The Rising. In 2012, he sees his beloved country dissolving into a bubbling cauldron of bitterness and defeatism: “the road of good intentions has gone dry as a bone.”

Springsteen easily taps into that anger on one banker-bashing number after another. By comfortably numb pop music standards, he comes off like a raving, Fox-baiting Marxist, even though the themes here are perfectly in keeping with the folk classics he reinterpreted on 2006’s We Shall Overcome—an album with which Wrecking Ball not only shares sentiments, but most of its backing band. (Very few E Streeters appear here—oddly enough, no-longer-touring member Max Weinberg is one of them).

Springsteen is not just channelling old protest songs, however. He’s pissed, and so are his protagonists. The angriest song here is “Death to My Hometown,” and it’s far from the lament of a similar name that closed Born in the U.S.A.: it decries the “robber barons” and “greedy thieves” who “ate the flesh of everything they found.” Furthermore, it’s set to a rousing, militaristic Celtic march, like it’s being sung by bloodthirsty barbarians crossing bridges into Manhattan, looking for heads to roll.

Even a seemingly more reassuring song—"Jack of All Trades," in which a handyman narrator assures his family that they’ll be self-sufficient amidst the current storm—concludes with the same narrator expressing a need to “find the bastards and shoot ’em on sight.” This isn’t about fairness or victimhood: it’s about vengeance.

Meanwhile, whereas Springsteen’s narrators on 1975’s “Meeting Across the River” or 1982’s “Atlantic City” have trepidations about doing some shady business to get by, the man in 2012’s “Easy Money” is swinging with a new-country swagger, boasting about strapping a pistol, hitting the town and looking for, yep, easy money. Springsteen doesn’t sing it with any shame or regret; this character sounds joyously entitled. And in the context of this album, why shouldn’t he? The corporate cannibals who profited from the bank bailouts are rolling in it—why should the average schmuck bother working for his windfall?

Lead single “We Take Care of Our Own” sets itself up to be another “Born in the U.S.A.”: a song with a feel-good anthemic chorus that is actually about what a pile of shit America has stepped in. Springsteen mourns the death of empathy, charity and civil society: “From the shotgun shack to the Super Dome / there ain’t no help / the cavalry stayed home.” He sings the titular chorus with a straight face, simultaneously mocking the sentiment while wishing it was still true.

On the title track, Springsteen taunts the forces that are tearing his community apart, inviting them to “bring on your wrecking ball / c’mon and take your best shot.” The bridge of the song urges: “hold tight to you anger / and don’t fall to your fears.” The song is Springsteen at his stadium best, with a wordless chorus, dynamic swells and ebbs, a horn section, Max Weinberg driving the ship, and the lyric’s ability to turn desolation into delirious release.

The rest of the album isn’t always as musically successful. Producer Ron Aniello is an odd choice: his biggest clients to date appear to be Jars of Clay, Barenaked Ladies and late-period Candlebox, and some of the production choices are a bit Pete Seeger-meets-Nickelback. The first rap to ever appear on a Springsteen album is performed by Michelle Moore on an uninspired gospel song, “Rocky Ground.” More than a few tracks sound good only because they’re in Springsteen’s hands; if anyone else—say, uh, Bon Jovi, for example—attempted the exact same material, it would be laughable. And finally, why does Springsteen hire Rage Against the Machine guitarist Tom Morello to play bloated and bad guitar solos on the ballads? Ultimately, however, these are all forgivable crimes, and Wrecking Ball is far more consistent than we’ve come to expect from late-period Springsteen.

It’s fitting, then, that Wrecking Ball is also the first Springsteen album since the death of his iconic sidekick, saxophonist Clarence Clemons in 2011; an excerpt from Springsteen’s eulogy for him appears in the liner notes, and Clemons appears on two tracks. (It’s not clear if they were recorded before or after his spot on Lady Gaga’s 2011 album Born This Way. For history’s sake, let’s hope it’s after.) Clemons’s solo on the 12-year-old live staple “Land of Hope and Dreams” (appearing for the first time on a Springsteen studio album only now) is undoubtedly affecting—but only really because it sounds like the last gasp of a once-great powerhouse. As sax solos go, it’s rather innocuous—nothing like the Clemons who would have once stolen the song out from under Springsteen and carried it to a whole other emotional level. It’s sad but beautiful, undeniably poignant, hearing him give all he had left, on a song about travelling to the afterlife.

Maybe more than the state of the nation, more than the election year anxiety, Springsteen knew that the best tribute he could pay his friend was to frame his final recorded moments inside a rousing rock’n’roll record that ranks with Springsteen’s best since he put the E Street band back together.

Download: “We Take Care of Our Own,” “Wrecking Ball,” “Land of Hope and Dreams”

Posted by mmmbarclay at 8:19 PM