Brian D. Johnson: Going out with a bang 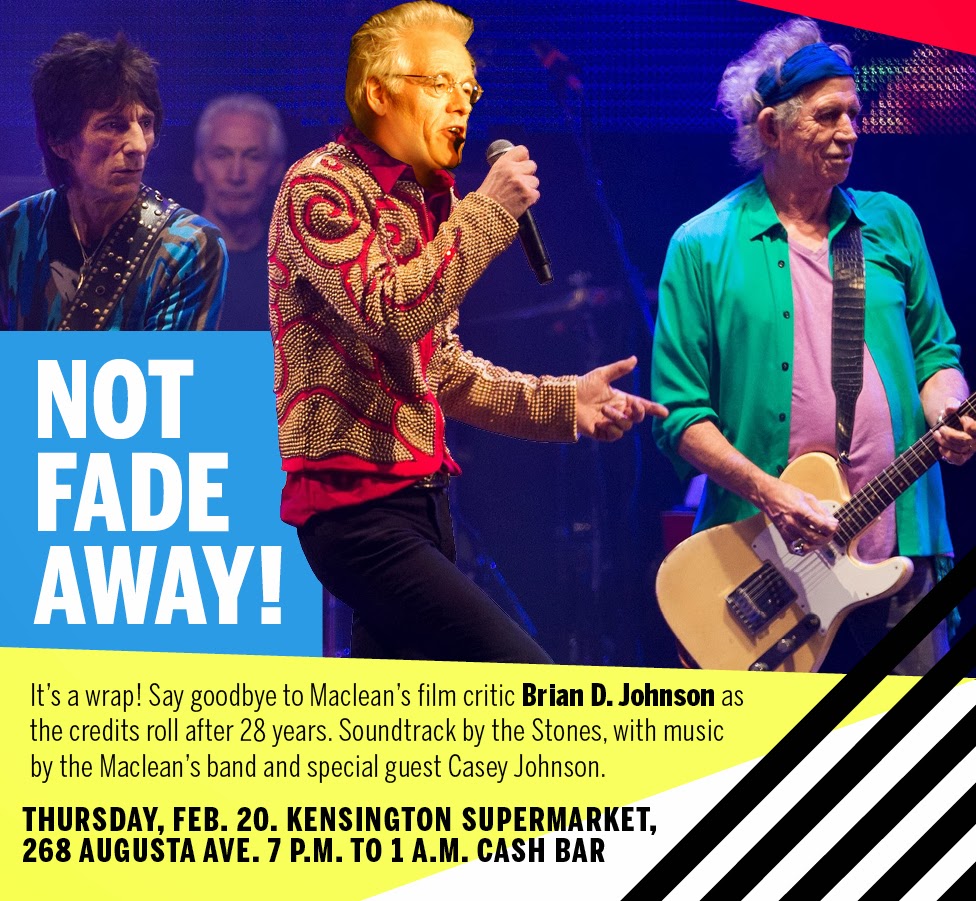 Journalists don't retire anymore. They're usually shuffled out of the office well before that's allowed to happen. Arts journalists are an even rarer breed, veteran ones practically extinct. Surely anyone can write about movies, right? Someone on the copy desk, perhaps? An intern?

Tonight, my Maclean's colleague Brian D. Johnson—BDJ to those who know and love him—retires from the magazine after 28 years as one of Canada's pre-eminent film critics, perhaps our only one who's been around long enough to not only remember the early days of the Toronto International Film Festival—indeed, BDJ literally wrote the book on that subject—but to be granted private audiences with Justin Bieber and Tony Bennett on tour (not together). He's the long-serving president of the Toronto Film Critics Association. One of his own short films features a contribution from his friend Leonard Cohen. Many of Canada's greatest filmmakers, from Bruce McDonald to Sarah Polley to Denis Villeneuve, will tell you what it's like to have BDJ in your corner.

Brian will tell you he’s as surprised as anyone he lasted that long, through various editors and publishers and changes in direction for Maclean's. Yet his skill and expertise are undeniable; his longevity should not be that shocking. Perhaps even more important—and this goes a long way in the biz, even more than talent—BDJ is an engaged listener, no matter the age, experience or importance of his conversation partner. He introduces himself immediately to all office newbies and puts them at ease. He's gracious and humble when he knows he's wrong (it's been my job as one of his copy editors in the last five years to tell him when that is). BDJ is as good a guy as he is a writer.

When he started, Brian used to write about a lot of things: music, art, literature, poetry. Then he realized he could cover all those topics if he focused primarily on film. He doesn't just bring the usual geekdom you get from (what used to be known as) a video-store clerk; that's a dime a dozen in blogland now. With Brian's best writing, you get a sense of a man who is in love with the world and the magical ways it's reflected back to us.

You can read his farewell piece for the magazine here.

His prose is clear, thoughtful—even musical. He's one of only two Maclean's writers (Nicholas Kohler is the other) who has ever come to the copy department worried about the rhythm of his sentences. Every Friday, he'd do a Rogers TV spot from the middle of the Maclean's office, recapping the week's new releases; anyone within earshot (basically everyone) in the background could usually be heard chuckling, if not laughing out loud, at his zingers. BDJ is not just a writer; he's a performer, consciously (like on stage at Massey Hall interviewing Al Pacino) or otherwise. Brian recently suffered an unexpected death in the family. The experience was obviously wrenching, but during unguarded office conversation afterwards, he recounted so beautifully that it left more than a few of us teary-eyed. Damn you, Brian. You're not supposed to be that good when you're not even trying.

I'm 42 years old. I grew up reading BDJ. The first time I met him, I had just started working at Maclean's, and had already been enlisted into the office band, just before the annual Christmas party. I showed up to rehearsal and there he was: a headshot come to life, looking something like an aged Archie character, boasting more effortless, unconscious rock'n'roll swagger than staff members half his age. Like most Boomers, he loves to sing Rolling Stones songs; unlike most Boomers, including Mick Jagger himself, Brian is good at it. He plays percussion: congas, shakers, cowbell, guiro, djembe and many rattling things of unknown origin. His editor loves to rib him about his bongos. BDJ doesn't care how or if he looks ridiculous. That is, of course, the definition of cool.

I've played many shows with BDJ, and he's a rock star every time. To be fair, so is the rest of the band: it's an immense privilege to play with each one of them. They're all more talented than I am. As one of two elder statesmen in the band, BDJ is inspiring in different ways. He shows us that the fountain of youth contains but one ingredient: curiosity. From there, everything else flows.

At rehearsal last night, BDJ was surrounded, of course, by beautiful women, his son (in matching leather jacket) and a loud band comprised of young and old. We joked that half the set list was about retirement: "Don't Leave Me This Way," "I Shall Be Released, "Not Fade Away," “Beast of Burden,” "The Last Time." BDJ was the last one to leave the studio. It's not like he needs to get up on time for anything in the morning anymore. But, just as at Maclean's, he gets to decide when—and how—he leaves the building: head up, eyes forward, a song in his head.

Brian D. Johnson's retirement party is tonight at Supermarket in Kensington Market, Toronto. Doors at 7pm, band at 8pm. No cover. But you should buy him a drink.
Posted by mmmbarclay at 10:12 AM