This is Lone Justice 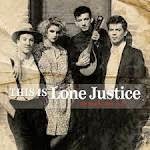 Lone Justice – This is Lone Justice: The Vaught Tapes 1983 (Omnivore)

Of all the bands who were ever called “cowpunk,” Lone Justice made the only one whose recorded work still sounds exhilarating today. Their self-titled 1985 debut, featuring the firecracker voice 20-year-old Maria McKee was the sound of gospel-inspired abandon, as applied to country songs played by a rockabilly punk band. Produced by Jimmy Iovine and featuring songs written for the band by Tom Petty and Little Steven, it had a mountain of hype behind it, thanks also in part to the band’s legendary live shows in their native L.A. Yet the album fizzled. The follow-up (Shelter, 1986) was overproduced and didn’t fare much better. The band split up; McKee went on to a moderately successful solo career (with at least two great albums: the 1989 self-titled debut, and 1993’s You Gotta Sin to Get Saved).

Their 1986 Saturday Night Live performance is here, at the Daily Motion. The second song there, "I Found Love"—well, holy shit. That's one of the most electrifying rock'n'roll performances I've ever seen. It punched me in the gut when I saw it as a teenager—then it grabbed me by the hair and threw me around the room.

The only singer who was even in the same ballpark back then? k.d. lang.

Here, we get a document of what Lone Justice sounded like when they were young and hungry and still unknown, with everything to prove. Recorded live to two-track tape by David Vaught (a bassist who had played with Tom Waits and Roger McGuinn), this time capsule is high on energy and spirit—but it’s also the sound of a young band finding their footing.

I can see now why they faced a backlash back in the day, accused of being posers, city slickers putting on country airs: the first songs they wrote together had titles like “Dustbowl Depression Blues” and “The Grapes of Wrath.” “I want to live on a dustbowl farm,” sings McKee, with all the ignorance of youth. Really? I’d call bullshit on that. She was obsessed with her grandparents’ generation—their stories, their songs, their fashion—but she quickly found her voice as a songwriter by the time of the debut album. Here, however, she’s just finding her legs, and the originals by her bandmates Marvin Etzioni and Ryan Hedgecock aren’t much better. They needed some co-writing help and some polish. That said, the song that first hooked me 30 years ago, “Soap Soup and Salvation,” inspired by McKee’s family ties to the Baptist church, rings as true here as it would in an only slightly revamped version on the debut.

It’s the covers, here, then, that are truly rewarding: romps through Merle Haggard’s “Working Man Blues” and Johnny Cash and June Carter’s “Jackson,” as well as the George Jones and Roger Miller song “Nothing Can Stop My Loving You,” and two reworked traditionals: “Rattlesnake Mama” and “This World Is Not My Home.”

Things didn’t work out for Lone Justice. Here, at the band’s very beginning, however, the world is still theirs for the taking, and they have no time for second-guessing. This is innocence, wide-naivete, and lightning in a bottle. (Jan. 15)

Posted by mmmbarclay at 5:12 PM