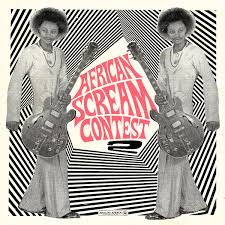 It was ten years ago that a flood of African music from the ’70s started getting deluxe reissue treatment. Interest in Fela Kuti and his Nigerian peers had started in the late ’90s—Brooklyn’s Antibalas deserves much of the credit—but by 2008 labels like Soundway and Analog Africa were finding deep cuts from all over West Africa, many—if not most of them—solid gold. One of the first key compilations was 2008’s African Scream Contest, the (very) loose concept of which was finding artists who found inspiration in James Brown and American R&B, and fused it with then-current trends in local West African music.

Why it took Analog Africa a decade to recycle that title is a mystery, and it’s obviously a commercial ploy (for that niche audience who seeks out such material): there’s nothing particularly “screamy” about this comp, but it does pull off the near-impossible feat of finding even more gold in those there hills, after more than a few lacklustre compilations suggested that supply had been exhausted. Limber funk, desert blues, synth-driven proto-disco, Afrobeat, and garage R&B all collide in glorious ways unique to the region.

New music by young African artists is making inroads to North American audiences, while the archival scene has shifted its focus to the ’80s, but the ’70s are still a deep well to be mined. (Feb. 1)

Stream: "Asaw Fofor" by Ignace de Souza and the Melody Aces; "Moulon Devia," by T.P. Orchestre Poly-Rhythmo; "How Much Love Naturally Cost" by Gnonnas Pedro and his Dadjes Band

Now that thoroughly modern African pop music has made international waves, via Drake and others, this is yet another in a welcome series of compilations—like 2016’s “Doing It In Lagos,” also from Soundway Records—that explore the ways in which non-traditional African music has always been on top of and pushed current trends. The music here would not be out of place in early ’80s Washington, D.C., on the go-go scene, or alongside the likes of Zapp or the Dazz Band or very early Prince. The synths are there, certainly, but so are big group harmony vocals and horn sections.

Make no mistake: this is pop music, so there are no traditional instruments or nods to what we might think of as African rhythms—at least, not ones that aren’t filtered back through an American influence. As with many compilations covering an underrated scene—in this case, one that existed and flourished in a fascist state—there are no stars here, or standout tracks: just a consistent dance party that offers a window into a unique time and place, and still sounds fresh today. (Jan. 11)

Here’s a wild story: Hailu Mergia was once the keyboardist in Ethiopia’s most popular group of the ’70s, the Walias Band, who would play 12-hour concerts in Addis Ababa. The group left for a U.S. tour in 1981, a time of brutal repression in their native country, and stayed. Mergia put out a cassette in 1985, but stopped playing in the early ’90s, opening a restaurant and driving a taxi in the Washington, D.C., area. Five years ago, the L.A. blog Awesome Tapes from Africa stumbled upon Mergia’s 1985 recording and reissued it, to wide acclaim. That inspired him to work on new music—often while driving his cab—which has led to this new album.

Mergia is a jazz keyboardist, equally adept at Rhodes piano, accordion, melodica and organ: the 10-minute opening track, “Tizita,” displays his prowess on all four. He has a swinging, funky rhythm section behind him, while he wails away on east African scales more often heard on stringed instruments. This is highly recommended for fans of the Éthiopiques series (of 30 albums, and counting), of rare groove, of non-Western jazz, or just anyone who wonders what Booker T and the MGs would sound like if they came from Addis Ababa. (Feb. 1)

Posted by mmmbarclay at 4:38 PM