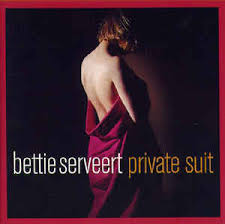 “Little works of wonder in a nostalgic mood”


I’m not a betting man, but I’d wager my life savings that this will be the only piece celebrating the 20th anniversary of Bettie Serveert’s Private Suit. It came out the same year as the Weakerthans' Left and Leaving and PJ Harvey’s Stories from the City Stories from the Sea; its aesthetic is somewhere in between and, to me, it’s as strong as either of those records. It’s a record about which I became evangelical, playing it for anyone who entered my house or my car. I’m pretty sure I played a track from it every week for a year on my campus radio show.

Unlike a lot of records from 20 years ago, even ones I adore, I pull this out and play it at least three times a year—usually during a long drive alone. Carol van Dijk’s voice is as comforting as the face of an old, dear friend. Peter Visser is one of my favourite guitarists of all time: capable of subtlety and squall, generous in his textures and acutely melodic in his solos. The rhythm section is perfectly complementary, either playing it straight or weaving in and around the vocal and guitar melodies. But the songs: sweet Jesus, the songs. More on that later.

If this Dutch band—the greatest since Shocking Blue!—is known to North American audiences at all, it’s because of their 1993 debut Palomine, which came out on Matador and fit in perfectly beside records by Pavement and Yo La Tengo. (I first saw them tour with the latter, in 1997, on a bill in Toronto where the opening band featured a very young Leslie Feist on bass.) Two more records on Matador followed, their evolving brilliance in sadly inverse proportion to general interest. This was nerdcore indie rock for people who watched mediocre Hollywood films hoping that Janeane Garofalo would magically make them better.

I don’t even like Palomine; it’s fine, but it’s baby steps. I fell in love with 1995’s Lamprey, and not just because one song features a passage that sounds like it directly samples the Rheostatics’ “Self-Serve Gas Station”—not just the melody, but the entire recording. (It’s a really weird coincidence, as I’m pretty sure there’s no way they heard that record—despite van Dijk’s Canadian citizenship, because she left Vancouver Island at age 7. Listen to “Crutches” at the 2.25 mark, and compare it to the Rheos at 4.23). The next album, 1997’s Dust Bunnies, was straight-up brilliant, shedding a lot of the straight-up grunginess of the first two and focusing on songcraft. I became so obsessed with the melodies and chord progressions that I sat down and learned the entire record on the piano by ear—not a normal habit of mine.

But by that point, no one cared. People still cheered loudest for the songs from Palomine. They were dropped by Matador. The drummer split. Private Suit was released to no fanfare, was barely reviewed, and wasn’t easy to find in stores (though it did have distribution here). Hence my lonely evangelical crusade. They didn’t tour North America to promote it, outside of one show in New York City at the CMJ Festival. I drove 10 hours there to see it.

How’s this for an opening line: “I took a Tylenol and an hour’s drive / and somehow found a reason why I’m still alive.” The chorus to that song is, “It’s good to be unsound.” Yeeeeeeah—let’s just say I come back to that song often. Throughout, van Dijk’s lyrics slay me. “Callous on the sore where you hurt before / are you happy now that you don’t feel it anymore? / Placid are the skies when you dream at night / are you satisfied? … Tell me what are we looking for, if all we really want is each other?” “Auf Wiedersehen” is one of the greatest breakup songs I’ve heard, a nonchalant acknowledgment of frozen stares and lost passion. Every song here is just as great.

This is all set to van Dijk’s magical melodies and Visser’s glorious countermelodies, with bassist Herman Bunskoeke an essential part of the glue. Van Dijk is also underrated as a rhythm guitarist. This is the only Bettie Serveert album with drummer Reinier Veldman, but he fits perfectly—not surprising, as he played in a band called De Artsen with them in the late ’80s. He adds jazzy textures to the string-laden swinging 6/8 time of the title track. PJ Harvey sideman and producer John Parish is the producer here, at a time when he was starting to branch out and work with Goldfrapp, Giant Sand, Sparklehorse and others.

Private Suit has a definite Euro feel to it in ways that are hard to articulate, other than to say it’s definitely not from an English-speaking country. Yes, there are nods to the Velvet Underground (a comparison that the band embraces, having released a live album of VU covers, which was the first record I ever ordered online), but there is an outsiders’ lens on North American indie rock that’s refreshing; they spent a long time trying to ape it, and now they’d successfully moved on while retaining the best bits. Private Suit is also easy to like: it’s a pop record with a down-to-earth singer and an unusually great guitarist. “Recall” is the kind of song I kept hoping the Cardigans would one day evolve into writing but never did.

Most music fans have a record or a band like this in their lives: something intensely important to them that seems like a lost cause to the larger world. Sometimes it’s the artist who lives around the corner, sometimes it’s a band on the other side of the world. Bettie Serveert must do well enough in their native Netherlands, because they’re still together and have released six albums since Private Suit, some of which are better than others (the follow-up, 2003’s Log 22, might be the weakest). I saw them in Montreal in 2004, touring the solid release Attagirl; they were fantastic, unbelievably good. (Reviewed here.) I have a vague memory of seeing them at the Drake in Toronto in 2010, touring a just-okay new record and being bummed out that the crowd didn’t seem to be listening until they played Palomine’s “Kids Allright.”

I’m just as bad as that audience of disinterested douchebags, because I’ll be honest: I lost the plot and stopped paying attention over the years, perhaps because this one record burned so brightly for me. That just means I have more Bettie Serveert records to explore, now that I’m in this wormhole. Maybe I’ll even learn them on piano. I’ve got the time. Better late than never.

Also: happy belated birthday to my old friend James Rocchi, who in the '90s told me he once woke from a dream about living above an Amsterdam coffee shop where he would meet Carol Van Dijk and smoke cigarettes and talk philosophy. One can dream.

Hey, but don't worry about me,
I'll be sitting by the seashore,
Laughing at the lifeforms,
Whistling down the breeze.
So don't worry about me,
'Cause you can't please everyone.
And I'm thinking to myself,
And I'm not the only one,
We all gotta learn
To give some in return,
Like little works of wonder.

The album is streaming everywhere. They're not on Bandcamp. I can't find video footage of any songs from Private Suit (lots of Palomine, though) other than some not-great ones of the title track. But, oh, look, here they are a couple of weeks ago, gorgeous and sounding great as always, Peter rocking a Chapel Hill T-shirt, playing a Cure song in a garden:

Posted by mmmbarclay at 2:01 PM