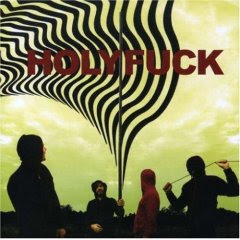 Holy Fuck – LP (XL)
The album: This band has exceeded expectations from day one. One of about a dozen Brian Borcherdt projects at its inception, it went on to become his main project. This perennial opening act is now headlining. And now, with its second album (following up a largely improvised debut), Holy Fuck cash in on their carpe diem live show, creating a rollicking and rockist take on electronica that sounded just perfect on the day Klaus Dinger died (though how many jury members get that reference might speak well to the band’s chances of winning). A band borne of jamming even conjures a couple of pop singles (“Lovely Allen,” “Royal Gregory”) for good measure, balanced by headtrips like the entrancing driving dub of the closer “Choppers.”

There’s enough variety and ebb and flow to make it work as an album, and the drumming alone surely deserves some kind of prize. But is it actually an excellent album, or merely an album that’s better than we expected from an excellent band whose raison d’etre seems to be the live show? (Which, by the way, hits The Phoenix this Thursday, September 25.)

The chances: I’m guessing that more than one judge on the jury will want to vote for this just as a giant Holy-Fuck-You to Stephen Harper, after the band became a scapegoat in the recent decimation of this country’s arts funding. It might also be tempting to reward them for being the hardest-working band on this list, one who crosses the ocean at a moment’s notice for a gig. But I’m going to guess that while Holy Fuck will get a lot of respect, they won’t get anyone’s final vote. 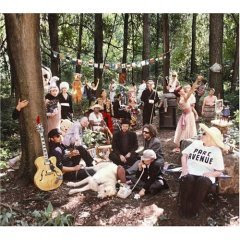 Plants and Animals – Parc Avenue (Secret City).
The album: I’d argue this is the most fascinating album on this list; everything else falls into predictably neat patterns and genres, including Holy Fuck and Caribou. Plants and Animals are very much a Quebecois band (though two thirds of them are Maritime expats): there’s a strong roots influence, a prog approach to song structure, African guitars and Radiohead atmospherics.

And yes, at times it does sound like a dog’s breakfast, which prevents me from loving this entire record wholeheartedly. But the many magical moments here supercede the occasional meandering and the inconsequential lyrics, and the end result crafts a unique sound that not only stakes its place in a continuum the began with Neil Young and The Band, but forges their own sound and places Plants and Animals heads and shoulders above any other ensemble likely to be tagged a “jam band.”

This album deserves a place on the list for “Bye Bye Bye” and “Mercy” alone; the fact they can pull off West African jazz on “Guru,” without sounding like tourists, is a bonus. Each member of this trio is a brilliant musician, and they ornament their core sound brilliantly with strings by Sarah Neufeld (Bell Orchestre, Arcade Fire), a bold horn section, female choirs and a heavy piano presence that is sadly missing from their live show. I saw them play shortly after the album’s release, and, while it was fine, I missed the depth and the breadth of the recording—which is as sure a sign as any that this album succeeds on its own terms. It also makes me miss Montreal incredibly, for entirely intangible reasons that I attempted to touch upon here.

The chances: Good, for the reasons outlined above. The ultimate selling point would be the breadth of influences, and how this band actually makes it all work. Only serious drawback: a potential bias against handing another Polaris to Secret City Records, who scored a surprise win last year with Patrick Watson.

Forest City Lovers – Haunting Moon Sinking (Out of This Spark).
The album: Kat Burns kills me. For starters, I’m a sucker for subtle ladies who sing melancholy morning melodies with lots of pianos, strings and clarinets. Burns is an unusual female vocalist: she’s certainly not a rocker, and nor is she showy or cutesy; in fact, she’s often totally deadpan, though never dull. She’s consistently strong, steady and with just a hint of a quaver that betrays a slight vulnerability underneath the calm exterior.

She is a vivid writer with an eye for the smallest details, as heard on songs like “Orphans” and “Waiting on the Fence,” and can say so much in the offhand way she delivers a line like: “Maybe I’ll never have your baby, if our love runs out of time.” On top of that, her Lovers are fully engaged in making sure every note counts, knowing exactly when to expand and contract, and with enough ego in check to sit out most of any given song entirely, if necessary. Mika Posen’s violin provides not only the expected textures, but a wonderful melodic counterbalance; she also provides some of the slight Eastern European motifs heard here.

Why it struck out: Forest City Lovers sound simply too humble for most critics to get worked up about. They’re not oddball enough to carry off any kind of subdued mystique; they’re not extroverted enough to get anyone’s blood pumping. Unfortunately, these things can matter when you’re trying to stand out in a crowd; eventually, Burns will succeed on the strength of her writing alone. 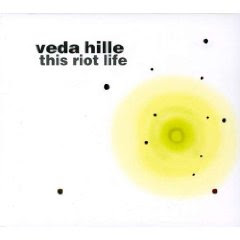 Veda Hille – This Riot Life (Ape)
The album: I’m under a lot of tight deadlines this week, so it thrilled my lazy ass this morning to discover that Carl Wilson has written something far more elegant and eloquent than I ever could about Ms. Hille. Please go to his site and read his piece immediately. I second every single word—even though I myself wouldn’t have conjured up a fraction of the allusions he makes. And keep in mind that he’s only talking about the opening track on this fine album (a track that is up for the Echo Songwriting Prize; please vote for it here). The rest of This Riot Life is an embarrassment of riches, in both composition and performance. I’ve always had a lot of respect for Hille as a pianist, as a bandleader and as an adventurous pop composer, though I’ll confess that I’ve never truly cozied up to any of her many recordings. And yet I’m in love with this album from beginning to end. I’d like to thank Spitzer for first putting it into high rotation in my household; her piece on Hille is here.

Why it struck out: This came out on Ape Records, the UK label run by Andy Partridge of XTC; both those associations mean very little to most Canadian music fans (despite the fervour of the XTC fans that do exist here). And people who think they know everything there is to know about Hille based on the past 15 years or so—the sad stereotype being that she’s an inaccessible artiste who survives on arts grants—probably think they can afford to ignore her latest work. They cannot. And neither can you. Small consolation: this did make the Polaris long list, so somebody is listening.
Posted by mmmbarclay at 11:38 AM