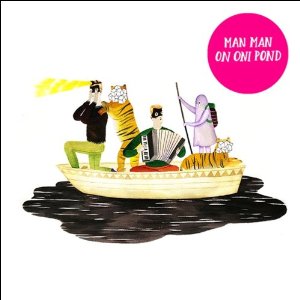 The main men men in Man Man, singer/keyboardist Honus Honus and drummer Pow Pow, are doubleplusgood kind of guys, propelling an aggressive, combustive carnival of oddball cabaret rock that made them one of the most visceral and entertaining live acts of the last decade. After a radical overhaul of the lineup last year, they were the only two remaining. Hence the band’s occasionally cacophonous clutter has been stripped away, and the frenzied energy has been focused—though hardly neutered.

The difference is that while before Man Man was the visceral release you needed during the most sanity-damaging times of your life—those days when you’re ready to quit your job, leave your partner, disown your family and smash your car and you’re in bad need of some primal scream therapy—they now make music that serves the same function, but for any time of day and any mood. So, you know, mature.

Much of that is due to Pow Pow, whose freneticism is now fine-tuned into direct, often funky beats that anchor everything else crammed into a Man Man song. If they were once a band that could be accused of trying to do everything all the time in the same song, there’s now room for ukulele ballads, reggae excursions, ’50s rock, and dance numbers that borrow sounds and rhythms from the Congotronics records.

Though surrealism and a quest for sanity remain at the core of the lyrical vision, now Honus Honus is also writing songs with choruses that could come from a post-"Wavin’ Flag" K’naan: “Hold on to your heart / hold it above the floodwaters / hold on to your heart / never let nobody drag it under.” Cheesy, sure, if it were coming from a slick pop machine, but in the gruff grips of Honus Honus—who sounds like there isn’t a shady corner of his native Philly he hasn’t frequented—it sounds empathetic, not patronizing.

On Oni Pond is Man Man’s best, most accessible and most danceable album to date—and one that will take their already legendary live show even more over the edge.

Posted by mmmbarclay at 9:22 PM