Day one is here; day two is here.

One of two albums I’m rooting for this year (the only two from my ballot that made it). It’s also an album I almost tossed after the first time I heard it; I didn’t understand Jennifer Castle before and wasn’t sure this time would be any different. And yet, this is the Polaris album I keep returning to again and again, hearing new lyrics, new textures, appreciating her melodies and chords in new ways.

An excerpt from my November 2014 review:

… Her voice is in full focus: every quiver, every time she slides between notes, the full body of her lower register. Castle’s music sounds like it was made in isolation, crafted in a remote Appalachian (or Algonquin) cabin (“I don’t need a home / don’t need a lover / I’ll be out on my own / come hell or high water”). Though rooted in folk forms, she doesn’t always follow familiar refrains, chord patterns or consistent tempos; many of her instrumental voicings and melodies owe more of a debt to jazz. Then there’s her voice itself: part Mary Margaret O’Hara, part Vashti Bunyan, a folkie flower child sounding alternately lost and innocent or wise and weary. In her left-field approach to folk, she also recalls Nick Drake, who used jazz players and stood far apart from his contemporaries. (She does not, however, sound like Nick Drake.) Though it was her solo performance I found so striking, Pink City is very delicately decorated with subtle touches from players careful not to tread on her unique talent.

Listening again closely now, what stands out is the judicious use of those guest players, most of whom are used to add one specific colour to a given track: one song features duelling flute solos, one song features pedal steel guitar prominently, one features harmonica, the title track features sublime saxophone work by Brodie West, fluttering around Castle’s vocal melody. Owen Pallett’s string arrangements are minimal but highly effective. Setting her apart from most folkies is Castle's use of directed tempos; this is not a click-track record, which makes the ornamentation that much more impressive. And this album also contains my favourite political lyric of the year, in a song about Canada’s oil sands: “I lift my skirt for the economy.”

I’m ecstatic this made the short list, because albums like this—mostly with regional appeal, released on a tiny indie, appealing mostly to the artist’s immediate musical community—are easily lost in the sands of time. Now it’s part of the canon. As it should be.

Mild. Okay, maybe better than that, if jurors give this album enough time to grow on them. But I’m purposely low-balling my expectations here.

Drake – If You’re Reading This It’s Too Late (Universal)

Is this an album? Or a stopgap before the much-hyped Views from the 6ix, expected in a matter of weeks now? No matter, it’s already made history: due to the ever-changing rules of what constitutes a single, Drake now holds the Billboard record for most simultaneously charting hits: all of these 17 tracks were on the Hot R&B/Hip-Hop Songs chart as of Feb. 26. This album was also the first 2015 release to sell a million copies (it might be the only one).

I’ve spent more time listening to Drake than any other artist I continue to actively dislike, and I recognize that I will lose any argument about his artistic merit—so I’m not even going to try anymore. I will, however, grant that his voice is no longer as cloying and flat as I used to find it; dude actually sounds like he’s trying to impress us instead of expecting us to just melt at the sight of his smile. And for an album that is, by its billing as a mixtape, assumed to be tossed off quickly, tracks like “Energy,” “10 Bands” and “6 Man” are—well, not among his greatest work, but they’d hold their own beside anything on Take Care or Nothing Was the Same. Everything else here is a decent B-side.

Good. Drake’s been shortlisted twice, and he’ll likely win eventually. Why not this year? Competition is not that fierce; there is no obvious favourite. It would be somewhat amusing if the man whose first big single boasted about how he “got rich off a mixtape” wins the Polaris for… a mixtape. 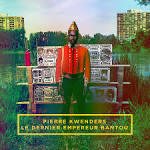 This was my favourite discovery of last year, thanks to a tip from Montreal writer Erik Leijon. It was released in October, got a Juno nomination for Best World Album, and I didn’t hear it and write a review until March; he didn’t get around to playing Toronto, to my knowledge, until this summer (July on the Roy Thomson Hall patio, August at Camp Wavelength). My March review:

Montreal has Canada’s best African music scene and its best electro scene. Naturally, it’s also the city most likely to witness fusion between the two. Kwenders was born in Kinshasa and came to Canada from the Congo at 16; his fellow Montreal producers hail from Mozambique (Samito) and New Brunswick (Alexandre Bilodeau of Radio Radio, whose bizarro Acadian take on hip-hop landed them on the Polaris Prize shortlist a few years back). One track here, “Mardi Gras,” featuring a lilting, distorted violin track, is perhaps the only Cajun-Congolese electro track ever made (see below). That’s only the beginning of the successful cross-pollination happening here: dancehall, South African rhythms, cumbia, Bollywood vocals, rock guitars and hip-hop all help colour Kwenders’s tracks. If Manu Chao or Bran Van 3000 had kept pushing their sonic explorations further, they’d likely end up in a similar place to Kwenders. Whatever you do, the man who sings in four languages told the Montreal Gazette, don’t call it world music: this is polyglot pop, and it’s a matter of time before Santigold or Rihanna starts ringing him up.

Or, as it turns out, Arcade Fire’s Win Butler, according to rumours. Too bad they didn’t hook up before Reflektor; I could see Kwenders making that good record even better.

It’s hard enough to get a francophone on the short list, never mind a guy who sings in five languages. Also, Congolese rumba is yet to be recognized as a breakout genre. (But it’s only a matter of time. See: Mbongwana Star).

Because most of Canada prefers to ignore francophone music—from Quebec or anywhere else—we know next to nothing about Jean Leloup. Our loss. Who is this wolfman, and why is he such a Quebecois hero? From my May review:

Leloup has been around since 1989; he took a brief hiatus in the mid-2000s and this is his eighth album. He’s the kind of carefree, globe-trotting troubadour who tries his hand making documentaries about monkeys in Costa Rica for six months, just because. He’s not wrapped up in rock stardom, despite his iconic status in his home province.That’s why A Paradis City is such a refreshing, welcoming record: Leloup exudes charisma, and writes anthemic songs that never succumb to bombast or weighty instrumentation—even when he calls in the choirs or string sections. Leloup makes it sound easy—hell, he even makes it look easy, by providing chord charts in the liner notes, and there are vocal-free karaoke versions up on his website. A Paradis City is the sound of a guy who could dial up the drama if he wanted to, but prefers more subtle strengths. There are quiet folk songs here, midtempo rockers, and a triumphant title track that shows, among other things, how much Sam Roberts learned from Leloup.

Since falling for this record, I’ve gone back and listened to more Leloup, including his iconic ’90s album Le dome. They’re all fascinating, but this is clearly one of his best. He’s getting better with age—when he decides to engage.

Polaris jurors have been piss-poor at nominating francophone records lately. Only four franco acts have ever shortlisted: Malajube twice, and Karkwa won in 2010. The last one to shortlist was Galaxie, in 2011. Also slept on this year: the amazing record by Salomé Leclerc, which I discovered too late in the game. If you claimed to care about new Canadian music at all in the last 12 months, you need to hear Kwenders, Leloup and Leclerc.