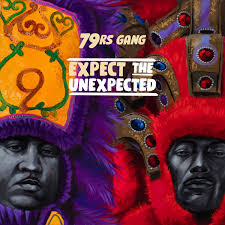 79rs Gang – Expect the Unexpected (independent). I can't claim to know a lot about New Orleans tradition of Mardi Gras Indians other than a well-loved copy of The Wild Tchoupitoulas in my collection. This is a band comprised of two former rival chiefs, who unite to make a thoroughly modern record steeped in deep tradition. Yes, there's yet another version of "Iko Iko" (this one called "Iko Kreyòl," with Haitian band Lakou Mizik), and a spoken word track that condenses New Orleans history into 90 second. But the rest is a welcome reset, with some help from members of Arcade Fire and LCD Soundsystem, if you need that to nudge you a bit closer.

Allie X – Cape God (AWAL). This is a really smart, well-arranged pop record, in the realm of a more operatic Maggie Rogers. It pushes all the buttons for me that Carly Rae Jepsen should but never does. Allie X is a pop star without a radio audience of her own; she writes for BTS, Katy Perry’s a fan, and she’s been slogging it out for a while, to the point where she has more than a million streams (which is more than some Canadian acts who fill arenas). But this album is where Allie X’s classical training and craftsmanship really come to the fore. Ideally, she’d be a household name by now; in the days of Kate Bush, maybe she would have been.

Julianna Barwick – Healing is a Miracle (Ninja Tune). Yes, yes it is. And I listened to this album and others like it (collaborator Mary Lattimore's Silver Ladders) this year as a meditative balm. Even if there are times when I feel like Barwick is the new Enya, and after reading about the latter in Chilly Gonzales's treatise and Jenn Pelly's Pitchfork appreciation, I might be okay with that.

Bloto – Kwiatostan (Astigmatic). Polish jazz from the end of the world. The drummer seems to be channelling drum'n'bass at times. The bassist plays Moog bass as often as he does electric. The keys are largely atmospheric and at times industrial, with the occasional vibraphone flourish or dark piano riff. The saxophonist plays tenor, alto, soprano and even that ridiculous Akai "electronic wind instrument." I know nothing else about this band other than that they sound like the Comet is Coming's creepier younger brothers. And it's awesome.

Budos Band – Long in the Tooth (Daptone). Hey, remember the '70s, when there was massive political unrest, people getting shot in the street, cities were decaying, there was mass unemployment, there was a drug epidemic and institutions were breaking down? And yet people made powerful music that managed to encapsulate all that in ways both beautiful and bleak? Thank god we have the Budos Band around today. This might be their first album where no one will compare it to a '70s NYC dystopian movie soundtrack, because we're living the movie right now. At least this is a part of the soundtrack.

Caribou – Suddenly (Merge). I wrote this in June: Dan Snaith continues to not only improve, but to remain unique in his field. I’m hard pressed to think of another electronic artist with this breadth of material in one album, from beat-less ballads to R&B pop songs to psychedelic jazz loops to early '90s house. Less rigid than his last record, this is Snaith’s most soulful and encompassing records of his long career. Suddenly is like his own greatest hits collection.


Jennifer Castle – Monarch Season (Idée Fixe / Paradise of Bachelors). This Toronto songwriter split for Port Stanley several years ago, and so instead of the usual all-stars surrounding her, this is a true solo record. And it's perfect: guitar, piano, harmonica, and that spine-tingling voice, all sounding like they were recorded in a rural town on the coast of Lake Erie (which they were). Remembering friends in "NYC," singing about how "butterfly days are here" in the title track, writing a paean to the moon on "I'll Never Walk Alone"—these are songs for meditative moments when life slows down to a crawl. Had any of those lately? She can even lift a phrase from a well-known Motown song—Jimmy Ruffin's "What Becomes of the Broken-Hearted?"—and make it entirely her own.

Brandy Clark – Your Life is a Record (Warner). Game respects game, which is why it's not remotely surprising that this Nashville songwriter got Randy Newman to drop by for a song called "We're Gonna Need a Bigger Boat." It's not even close to the best song here. Like him, she is a master of character portraits, rich with acerbic details and kiss-off one-liners. She sounds cynical at times, but that's the "hopeless" part of "hopeless romantic." This is ostensibly a country record, but any fan of great songwriting should get on board.

Alabaster DePlume – To Cy & Lee: Instrumentals Vol. 1 (International Anthem). “People have said this to me: ‘I put your music on, and it was perfect, but then you started shouting something about a pig. Can’t it just be the nice bits?'" Alabaster DePlume explained to The Quietus about why he put out an instrumental record lifted largely from his previous four albums. I knew nothing about this oddball beforehand, so I can't really comment on his pig poetry, or how this album relates to his work in music therapy, but I do know that this is a beautiful, soothing record focused mainly around a saxophone played with maximum vibrato, which suits the eastern melodies. This isn't jazz or experimental or specific to one specific cultural reference (though there are certainly nods to Ethiopian jazz); it simply sounds like open-minded, delicate players aiming for beauty. This was essential pandemic listening for me early on.

Sarah Harmer – Are You Gone (Arts and Crafts). I wrote this back in June: The master is back. It’s been 10 years since we last heard from her, and she’ll tell you this is her best record yet. Strong words: it’s hard to top the untouchable You Were Here or I’m a Mountain. But this comeback is full of timeless gems, not the least of which is “St. Peter’s Bay.” And dammit, “New Low” is exactly the political pop song we needed in 2020; I only wish she turned up the guitars on that one in order to match the lyrical bite. Would love to hear Billy Talent take a stab at that. Can imagine Stars doing a lovely cover of "Wildlife." But can't imagine anyone but Harmer improving on the sublime "Just Get Here" or "Little Frogs" or "Take Me Out" or, or, or... ah, dammit, it's so great to hear her voice again. Her comeback might have been ill-timed from a business standpoint, but fans really needed to hear from this old friend during times like this.

Posted by mmmbarclay at 3:12 PM