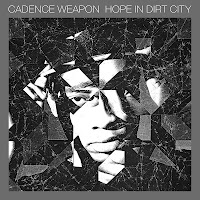 The former poet laureate of Edmonton resumes his rap career after moving to Montreal, and delivers a tour de force of storytelling and genre-jumping. He’s no longer the 19-year-old outlier overachiever he was on his debut album; now he’s an album artist at the ripe old 26, having relocated to a bohemian paradise where he “walks down St. Laurent avec les filles de roi.”

The MC born Rollie Pemberton has little competition in Canadian hip-hop—outside of Drake, with whom he shares a default position of a laid-back, laconic flow. Except unlike Drake, Cadence Weapon is in love with language rather than just himself, spitting more lyrical head-turners in one verse than most MCs’ entire tracks.

Pemberton’s skills as an MC were never in doubt; here, he proves to be an impressive singer as well, and a rapper with more varied flow than he’s shown before. Cadence Weapon is no longer just an abstract MC: he’s a punk rock howler on the climax of “Jukebox”; he’s a soul singer and shouter on “Conditioning”; he’s a slow-jam crooner on “No More Names.” He’s also an effective character actor, as on “Hype Man,” a comical role-playing narrative about the fractious relationship between an MC and a member of his entourage; it’s funny not just for its skewering of a well-worn convention in hip-hop culture, but because it applies to all sorts of power dynamics (think Michael Scott and Dwight Schrute on The Office).

That’s not even the most compelling part of Hope in Dirt City. Musically, Pemberton pays homage here to go-go funk, punk rock, Southern bounce, icy electro, R&B balladry and anything else he can find. Several tracks are constructed as rock songs, with killer bass lines and intense climaxes, and yet never veer into dreaded rap-rock crossover territory. "There We Go" is an intoxicating, icy electro ballad with a lurching, sparse beat and ominous synths, suggesting Pemberton has been hanging out with some Mutek festival folk in his newly adopted city of Montreal; the title track, on the other hand, sounds like a whole other Montreal influence: Corey Hart. Seriously, this is some Boy in the Box shit—and even more seriously, trust me when I say I’m probably one of the few people who mean that as a compliment.

The only time any one recognizable genre during the course of a whole track is the dub reggae vibe of "Small Deaths." Otherwise, anything and everything is fair game and filtered through pitched snare drums, old synths and—in a stint of seemingly stunt casting—the wailing tenor saxophone of Pemberton’s uncle Brett Miles, an Edmonton session player who lets loose in ways that haven’t been heard in hip-hop since the trumpet solo in LL Cool J’s "Going Back to Cali." Miles isn’t interested in jazzy interludes; this saxophone is out to steal the entire show, which he almost does.

For a record with broad reach, Hope in Dirt City is remarkably concise, clocking in at 11 tracks in under 40 minutes. Cadence Weapon is going for the gold and makes every sonic second here count.

--Opening track “Get On Down” begins with a blistering verse that
suggests Pemberton is out to prove something, toying with meter and internal rhymes, and references to Cessna, Telsa, Stephin Fetchit, disinfectant and Roy Orbison, over what sounds like a bastardized Bollywood funk beat, courtesy of Doldrums.

--“Jukebox” sounds like a collision of DJs squaring off at full volume at the same time (in a good way): Latin percussion, descending metal rock riff and squealing jazz saxophone, and the eight-bar breakdown of simultaneous bass and saxophone solos is brilliant.

--Pemberton is not just clever and thoughful, he's funny ("She said she used to be the hottest girl in Ajax / but in Montreal she's just an 8 1/2").

--Every soundscape is a story unto itself; there’s very little repetition here, other than the recurring sax leads of Brett Miles. Neither cheesy nor tentative, Miles takes hold of every note, never overplays, and is a welcome reminder that not everything about ’80s sax solos was terrible.

--The Buck 65 cameo on “The Machine” is a pitch-perfect interlude, and totally hilarious: complementary but with a whole other flavour, threatening to steal the show and lightening the mood with absurdist images that stand out as some of the album’s best lines.

--“No More Names” speaks to much more than a lyricist’s concern about committing his current lover’s name to tape, lest he be haunted by it for the rest of his career. It’s about all preservation of memory, all those photos of old lovers that we can’t bear to throw away but that we’re certainly not going to display when we bring someone new home.

--The pitched snare on “Hype Man” functions more as a malletted instrument, like a marimba, than as a mere effect, the way it is on Drake tracks.

--That first verse I like so much is followed by a lame spelling of his own name, followed by a limp chorus of “party people get on down,” both of which act as a buzzkill right off the top. In fact, several tracks fall apart once they hit the chorus, depending on the verses to rebuild momentum: “Conditioning,” “The Machine,” “Hype Man.”

A hip-hop act has yet to win the Polaris. Nor has anyone born in Edmonton. And although I like this record, it’s received some serious hate from hip-hop fans, for reasons I can’t for the life of me figure out. Picking Cadence Weapon as winner would ignite a damaging (and futile) debate over what is and what is not hip-hop, and what kind of hip-hop scores points with crossover fans.

Posted by mmmbarclay at 9:05 AM