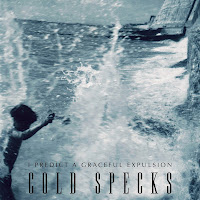 Cold Specks is the young singer/songwrier Al Spx (not her real name) from the Toronto suburb of Etobicoke, and her debut album has been building buzz ever since she leaked the song “Winter Solstice” online. Listening to that track, there is much to love: Spx’s full-throated, soulful voice, with its deep gospel and blues influences, is put to work on a slow build of a song that’s stirring and spiritual.

Listening to the rest of the album, however, there is not as much to love. Spx’s amazing voice (reminiscent of another great Toronto singer, Kate Fenner) only goes so far: her songs don’t carry the weight her voice deserves, and her accompanying musicians are often plodding and unexpressive. Too often, her voice overpowers this material: like Aretha Franklin trying to make a sombre Leonard Cohen album.

The graceful expulsion promised by the album title sounds like it’s still a bit off in the future.

--That voice. Holy crap, that voice. Spx can take a simple phrase—“sons and daughters,” “I am a goddam believer”—and make it sound like Shakespeare delivered by Laurence Olivier. For her voice alone, Spx is a major new talent who has been vaulted from obscurity to have the ear of the world.

--“Winter Solstice” is a stunning track, and if the rest of the album was just as good, I’d have no problem handing her the Polaris. The first minute, with just Spx and piano, is breathtaking—and then it only gets better once the pulsing bass drum, electric guitar, and choir of male hummers enter for the chorus, leaving immediately again for the second verse. The strings, when they come in closer to the end, are just as simple, sparse and effective as the percussion. For a song that never strays from one chord, the overall effect is stunning.

--“Hector” is the one track that breaks from the formula—it’s also the only one that requires a full band, which Spx employs to great effect.

--She recently opened for Great Lake Swimmers across Canada; on “Elephant Head” she namechecks the sequential Toronto subway stations Bathurst, Spadina, St. George and Bay, which to me is an obvious nod to the Swimmers’ song “I Will Never See the Sun,” which does the same thing, and often the mood on Expulsion reminds me of the Swimmers’ finest work.

--“Heavy Hands” is indeed, heavy-handed. With a two-note chorus melody consisting of just two words—“Fire away!”—it’s echoed each and every time by a groaning violin, just in case we missed it. It’s a shame, because outside of the choruses, it’s a lovely, subtle song—until that ocean of obviousness comes cascading through the chorus.

--As beautiful as “Winter Solstice” is, I feel like the exact same chord progression, with only slight variations, appears throughout this record (despite the fact that, um, “Winter Solstice” only really has one chord). Often I start singing “Winter Solstice” to myself when one of any number of other tracks is playing. On its own, “Blank Maps” is a great song—except the arrangement is almost identical to “Winter Solstice,” substituting a steady build for the second-verse dropout.

--One could argue that any historically great folk singer recycles motifs and musical themes; one could also argue that Spx is still a very green songwriter. If this record was massively popular and subject to a major backlash, I’m sure some mash-up artist could successfully sync up every track here.

Polaris has never gone to a debut album before. Why start now?