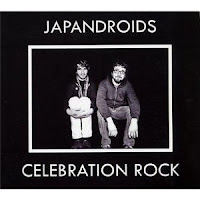 Japandroids sound like the best of Vancouver’s storied punk rock history, dating back to 1976 and right up to compatriots The Pack A.D, who share the Japandroids’ approach to maximizing the amount of sound and fury that can be made by a guitar-drums duo. There are also of plenty oh-oh-oh-oh melodic choruses that could have been cribbed from the New Pornographers, and ringing, raging electric guitars and thundering drums that could be Black Mountain covering Superchunk songs. This is not lazy, laid-back Vancouver chilling out in Stanley Park; this is the sound of the street punk trying to scale the mountains.

It’s been over three years since Japandroids’ debut album made them the only rock’n’roll band out of Vancouver in the last 10 years, other than Black Mountain, to be worth crossing the Rockies for. They also nearly broke up right around the time that album came out, choosing to continue only because it became popular. They could just as easily called the whole thing off after that tour ended. The songs here are proof that they had a lot more life in them; this is not a band that takes itself for granted.

The songwriting has improved tenfold; Japandroids are longer content to simply hide behind pure aggression, noise and energy—which is what, if anything, carried the debut album. Instead, these songs are Springsteen anthems designed for stadiums of people to sing in unison. The production is note-perfect: clean without ever sacrificing the raw power of the band’s live show; every guitar chord is gigantic, every drum roll a punch in the gut. The sound of fireworks may bookend the music here as a cute play on the album title, but there are actual moments in nearly every song when you expect to hear some kind of pyrotechnics go off in time with the music.

Celebration Rock could well be to 2012 what the Constantines’ Shine A Light was back in 2002: a life-affirming, fist-pumping rock’n’roll tour de force that soundtracks a new generation. In other words, Japandroids have plenty to celebrate.

--This album kicks ass in the most visceral way. I haven’t heard a Canadian rock record do it for me like this one does since the D’Urbervilles highly underrated debut (which I hope has a renaissance with recent Diamond Rings fans). The woah-oh-oh hooks borrow the best parts of Arcade Fire’s Funeral—the kind Springsteen stole back for the title track of his 2012 album—but recast for a garage rock duo ferocious enough to challenge a band six times their size.

--Much of the album taps into a nostalgia for youth, the kind that Springsteen has been milking ever since he was still a young pup himself. It all starts with opening track “Days of Wine and Roses,” but it summed up in “Younger Us”: “Remember when we said things like we’ll sleep when we’re dead, and thinking this feeling was never going to end?” “Give me that naked new skin rush / give me younger us.” It’s the kind of album that appeals to twentysomethings who can’t wait to feel nostalgic about their current life, and new parents who remember what it was like to come home at the same time in the morning they’re now getting up to nurse their infants.

--The guitar work sounds huge, although it’s just one person; knowing that he can never afford to split duties between rhythm and lead, he manages to craft brilliantly melodic leads as a component of the “continuous thunder” of the rhythm part.

--On an entirely primal level, this is the only shortlist album that makes me do windmills and sing along.

--This reminds me a lot—a whole lot—of the Constantines, and makes me miss that band even more.

--The only serious failing is the cover of The Gun Club’s “For the Love of Ivy,” which is by no means terrible, but it’s inferior to every other song here.

--I’m somewhat concerned about the fact I respond to this album primarily on a visceral level musically, and lyrically as a 40-year-old new dad realizing his youth is forever gone.

No one really expects this album to win. Which, of course, means it probably will.
Posted by mmmbarclay at 10:10 AM